By relying on prevailing practice to set locally employed staff compensation, we are benefiting from the same labor exploitation that we oppose as a matter of U.S. foreign policy.

Most Foreign Service members have a keen understanding of the intricacies of our pay scales and benefits, but we don’t often give much thought to how locally employed (LE)staff (formerly known as Foreign Service Nationals, still the preferred term for many) at our overseas missions are compensated. How does the State Department account for local conditions at more than 200 posts to ensure that LE staff are paid adequately?

The short answer is “prevailing practice.” Local labor markets are surveyed at each post to determine appropriate compensation for our LE staff colleagues. In economies where prevailing labor practices are driven by free, fair and competitive labor markets, this model ensures that posts are able to attract, hire and retain quality employees.

But many of the economies in which U.S. diplomatic missions operate are far from free or fair; instead, they are characterized by exploitative labor practices and human rights violations. In such places, following prevailing practice fails to meet the need of the State Department to maintain a corps of professional local employees. Moreover, it puts the department at risk of following the very practices that are condemned in our own reports on human rights, trafficking in persons (TIP) and labor conditions.

Embassy Kuwait, where I am management counselor, and other U.S. diplomatic missions in Gulf Cooperation Council member-states on the Arabian Peninsula have begun to advance the argument that the U.S. government must do better when prevailing practice fails. While we have had success in gaining policy exceptions, the department still needs to do more to lead (rather than follow) prevailing labor practices in exploitative labor markets, even if it requires an act of Congress to do so.

The Foreign Service Act of 1980 requires that the State Department base compensation for LE staff on prevailing wage rates and compensation practices in the host country, but qualifies this requirement with the clause “to the extent consistent with the public interest.” In practice, the Bureau of Human Resources’ Office of Overseas Employment has used surveys of data from comparators—comparable organizations and companies operating in the host country—to determine prevailing practice at each post.

In countries with competitive labor markets, such as in the European Union, prevailing practice gives post management and HR/OE the justification needed to fund salaries that in some cases exceed U.S. salaries for similar positions. (I saw this firsthand in Dublin, where some LE staff who reported to me had a higher base salary than I did.)

Many of the economies in which U.S. diplomatic missions operate are characterized by exploitative labor practices and human rights violations.

In cases where the situation in the host country warrants an exception, the under secretary for management may make a Public Interest Determination. PIDs have been approved in cases of rampant inflation, violent conflict or other extreme conditions that may result in unique difficulties and potentially high attrition. In posts with weak or authoritarian labor regimes (often characterized by human rights and labor abuses), extreme conditions are, sadly, an everyday reality.

Following prevailing practice in such environments fails to achieve the goal of “excellence and professionalism.” This became painfully clear at our posts on the Arabian Peninsula.

The countries that comprise the Gulf Cooperation Council—Saudi Arabia, Kuwait, Bahrain, the United Arab Emirates, Qatar and Oman—share similar labor conditions that are unlike those in the rest of the world. They depend extensively on imported labor; in many of these countries, the population of expatriate workers far outnumbers the country’s own citizens.

The kafala (sponsorship) system these societies use requires each expatriate to have a local citizen employer or sponsor to work or invest in the residing country. While details vary by jurisdiction, the sponsor often exercises complete control over the expatriate’s living situation and access to financial assets, retains their official documents and can single-handedly prevent them from leaving the country. This leverage can easily be used to pressure expatriate workers to accept unfavorable terms, and perpetuates trafficking in persons and other human rights abuses.

Under kafala, the free market does not function properly. Employees are not fully free to change jobs or negotiate contract terms, and wages can be held artificially low even as the rest of the economy faces significant inflationary pressure. In addition, the expatriate-dominated labor market is fully controlled by the citizen-dominated employers—and only citizens have any influence on local labor laws.

Current State Department policy already allows for exceptions to prevailing practice in cases of high attrition. However, attrition is an ineffective metric for measuring wages in tightly controlled labor markets, as in the GCC. In many cases, third-country nationals (TCNs) are not free to change jobs, or can do so only at great risk.

In Saudi Arabia, for example, expatriates are allowed to transfer sponsorship from a commercial entity to a diplomatic mission, but not vice versa. This means that the mission’s TCN employees are not able to take other jobs even if a better offer becomes available. In the UAE, some nationalities are restricted from transferring sponsorship, and if they leave their job they must return to their home country, or are considered to be in illegal status after just 30 days.

State should establish minimum standards, based on the cost of living and poverty guidelines, for compensating LE staff members—regardless of prevailing practice.

For many TCN employees, returning home is not a viable option. Some Palestinians have never even been to what they consider their home country, while those from Somalia or Syria must watch from afar as their countries are caught in the nightmare of a civil war. Others have accumulated significant debts and are not allowed to leave their GCC host country until they have paid them.

These employees are effectively trapped: unhappy with their jobs, unable to make ends meet or reduce their debt, and separated from family for long periods. It is not uncommon for LE staff to comment that life in these places is not what they had bargained for, and now they are stuck. Low attrition rates in GCC posts reflect the restrictive kafala system, not job satisfaction.

For all these reasons, prevailing practice in GCC countries is equivalent to labor exploitation, and has led to serious TIP concerns and negative findings in official State Department reports. (In 2015, Kuwait was a Tier III country in the Trafficking in Persons report, while Saudi Arabia and Qatar are ranked on the Tier II Watchlist, and Bahrain, the UAE and Oman are Tier II.)

Even if the department uses only organizations that do not engage in trafficking abuses for comparison—e.g., other Western diplomatic missions, the United Nations and reputable multinational corporations—prevailing wages are still influenced by the artificial wage depression created by kafala. So by relying on prevailing practice to set LE staff compensation, we are benefiting from the same labor exploitation that we oppose as a matter of U.S. foreign policy.

In 2015, after four years with no wage increases and the high inflation common in the GCC, many members of our LE staff were in dire financial circumstances. Unable to afford living in these places, some staff resorted to illegally sharing housing with multiple families. Others chose to split their families, sending spouses and children back to their home countries. Some have moved to distant towns, adding hours to their daily commute.

In Kuwait, 91 LE staff members (almost 30 percent of all embassy staff) had been forced to send their spouse and children back to their home country in order to move into cheaper, shared accommodation and save on living expenses. Not only was their standard of living dropping, but they found themselves alone, increasingly unhappy and, ultimately, less productive.

At the beginning of 2015, 70 percent of LE staff members in Kuwait were living below the poverty level as defined by the government of Kuwait; 58 percent were making less than the U.S. poverty level, even though the cost of living is much higher here than in the United States. Yet despite our best efforts, prevailing practice—not the cost of living—continued to drive LE staff compensation policy for the department. And since the data showed we were already paying our staff “above average,” no raise was authorized.

Under the leadership of Ambassador Douglas Silliman and Deputy Chief of Mission Joey Hood, Embassy Kuwait coordinated an effort among posts in GCC countries to request Public Interest Determinations that would create or enhance allowances for LE staff, beyond prevailing practice. We issued a joint cable in January 2015, cleared by six ambassadors, outlining the failure of prevailing practice at GCC posts.

To support that effort, each mission collected data on rising housing, education and transportation costs, and documented host-government policies that disadvantage TCN employees. Political and economic sections also drafted cables outlining the failures of the kafala system, its disproportionate impact on expatriate workers and the rising cost of living overall. The Near Eastern Affairs Bureau’s executive office engaged with HR/OE, the Foreign Service Director General and the under secretary for management to make the case.

Ultimately, the department approved PIDs and implemented additional allowances. At Embassy Kuwait, the result was an average increase of 22 percent in total compensation for local employees, plus education allowances for employees with school-aged children. Thanks to the new allowances, families of LE staff have begun to return to Kuwait. Employee morale, productivity and dedication to the mission have all noticeably improved as a result.

While the recent improvement in compensation was a desperately needed and much-appreciated remedy, it is still only a Band-Aid for what remains a chronic illness. GCC posts have struggled with these issues for many years and have each found ad-hoc short-term solutions within the constraints of the LE staff compensation system. But these one-off solutions depend too much on the interest and efforts of individual human resources and management officers, and the support of their front offices.

There is a better way.

Because GCC countries are far from being the only exploitative labor markets in the world, the department needs a policy to address failures of prevailing practice wherever they occur. In a concrete demonstration of U.S. policy support for human rights, labor rights and combating trafficking in persons, our missions should lead by example, rather than simply following local practices.

Toward that end, State should establish minimum standards, based on the cost of living and poverty guidelines, for compensating LE staff members—regardless of prevailing practice. Not only would this ensure that no U.S. government employee overseas lives in poverty, but it would give U.S. missions the moral authority to press for labor reforms in our host countries.

Through such steps, we can lead the way to lift prevailing practice to minimally acceptable standards rather than using it to justify unacceptable wages.

Developing procedures to evaluate and establish minimum standards will require effort. Implementing them may even require an act of Congress. But it is the right thing to do, and the only way to guarantee that we achieve the goals of the Foreign Service. We owe it to our Foreign Service colleagues around the world to lead the way on fair labor practices. 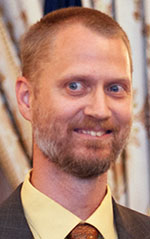 Jefferson Smith has served as the management counselor at U.S. Embassy Kuwait since 2014. A management-coned Foreign Service officer since 2000, he has previously served in Kingston, Dar es Salaam (twice), Yaoundé, Dublin, Kuwait and Washington, D.C. Mr. Smith is the 2016 winner of the AFSA Award for Constructive Dissent by a Mid-Level Officer 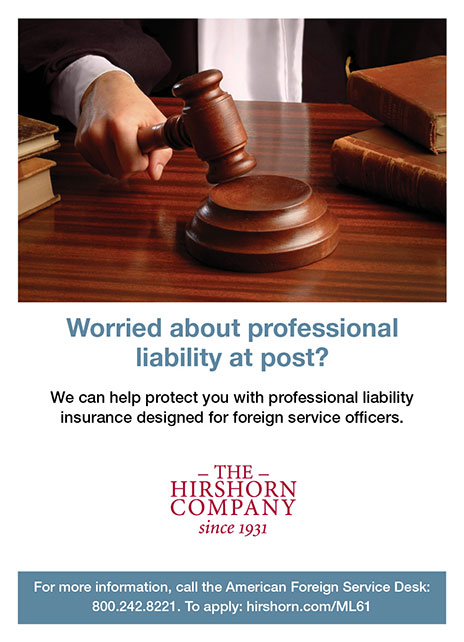 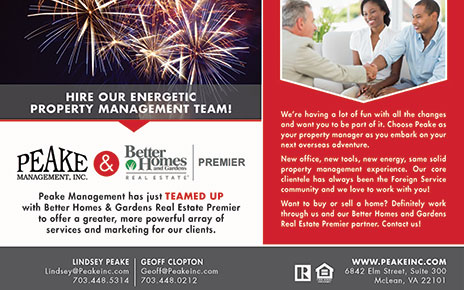 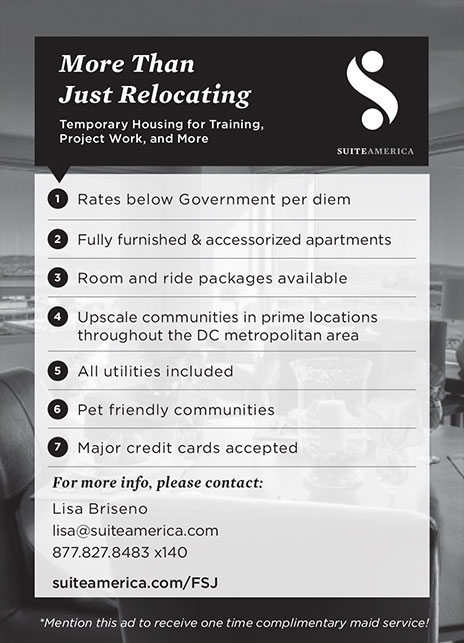 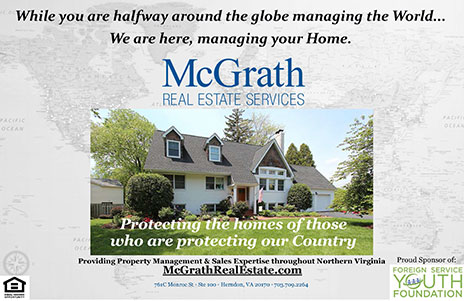