A gay FSO working in the Office of Diversity and Inclusion discusses what the initiative means for the LGBTQI+ community.

The Secretary’s Office of Diversity and Inclusion (S/ODI) is strengthening existing and developing new policy to integrate diversity, equity, inclusion and accessibility (DEIA) into our day-to-day work, which will make us a stronger, smarter and more creative institution.

I am a gay employee, and part of my job in S/ODI is looking out for the interests of our LGBTQI+ workforce, which has made great advances since glifaa was founded in 1992. This month we celebrate these successes, but I remain worried about LGBTQI+ employees’ ability to maintain the rights we have gained and pass on our heritage.

Speaking as a member of the LGBTQI+ community, I am concerned by the ongoing, often vitriolic pushback against the transgender community living openly and freely and enjoying the same human rights as others. I worry about states banning children’s books because authors address topics like sexual orientation and gender identity. I worry about state laws that make it illegal to refer to any part of the LGBTQI+ community in front of children, even though many of those children have LGBTQI+ parents, friends and neighbors. This creates disunity in society, stigmatizes our community and degrades our humanity. I know that many others, in and outside the community, share these concerns.

This is not the first uncertainty for our community. Glifaa was founded in part to prevent another “lavender scare,” the period in the 1950s when government employees were interrogated, harassed and fired because of their sexuality. S/ODI wants to ensure employees are never again frightened or uncertain about living their truth and embracing and sharing who they are. S/ODI has contracted with the producer of the 2019 documentary “The Lavender Scare,” which ran on PBS, to give all posts the ability to air it free of charge if they wish during Pride Month, as part of the office’s work to make a safe and inclusive workplace.

The LGBTQI+ workforce is an important focus of the department’s five-year DEIA Strategic Plan that S/ODI recently finalized. It prioritizes equity in accreditation for all spouses overseas, to make it easier for families to work abroad without fear of harm or maltreatment because of their sexual orientation or gender identity. Building on the work of the Bureau of Global Talent Management and the Same-Sex Spouse Accreditation Working Group, Deputy Secretary for Management and Resources Brian McKeon elevated the issue this year by launching a campaign to reframe how the State Department engages with countries on accreditation. For more information, contact Staci Ali-Ibrahim at ali-ibrahimsb@state.gov.

S/ODI wants to ensure employees are never again frightened or uncertain about living their truth and embracing and sharing who they are.

S/ODI is also raising LGBTQI+ employees’ visibility and beginning to leverage data to assess equity in employee career progression. Current law does not allow collection of LGBTQI+ workforce data, so voluntary self-identification is essential. This year, S/ODI dedicated part of its budget to expanding how employees can voluntarily self-identify in the GEMS personnel system and hopes to deploy the pilot in late summer. This will provide a more complete snapshot of department diversity regarding LGBTQI+, national origin and heritage, and educational background. S/ODI encourages all employees to show allyship by self-identifying these new categories when they become available and ensuring that you have already self- identified race/ethnicity and disability.

As a helpful March 31 DipNote op-ed by three transgender colleagues points out, roadblocks to transgender equity, inclusion and accessibility remain. This is another focus area in my work in S/ODI. A major step forward came because of the great work of the Bureau of Consular Affairs. On March 31, Transgender Day of Visibility, Secretary of State Antony Blinken announced that, starting April 11, the department will be the first U.S. agency to offer an X gender marker option on an identity document—a U.S. passport. The new X gender marker will directly benefit transgender, nonbinary and intersex employees and eligible family members.

S/ODI is working to make processes to get a name changed on a department badge and in an Outlook profile more clear and efficient. S/ODI worked with the A Bureau to make bathroom signage more inclusive and encourage development of more all-gender bathrooms. As a result of these discussions, the A Bureau is including all-gender bathrooms as part of its design standard for ongoing modernization of the Harry S Truman Building and other facilities. In my opinion, other positive steps would be using the “Mx.” honorific in the opening of all department correspondence instead of “Mr.,” “Ms.” and “Mrs.” and expunging gendered language from the FAM/FAH.

Now as ever, straight and cisgender allies are essential. My LGBTQI+ colleagues and I thank the many allies who have contributed to our success. Please continue to stand with us as we seek full integration of our community at State.

To learn more on how the department is advancing equity for LGBTQI+ persons within our institution and abroad, tune into the S/ODI townhall on June 29, 9-10 am EDT, at interactive.state.gov/DEIA-advancing-equity. 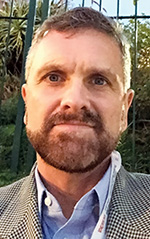 Thomas Coleman is a Foreign Service officer currently serving as a senior adviser in the Secretary’s Office of Diversity and Inclusion. His overseas postings include Brazil, Turkey, Israel and the Netherlands. In Washington, he has served in the State Department’s Operations Center, Bureau of Near Eastern Affairs’ Office of Regional and Multilateral Affairs, Bureau of South and Central Asia’s Office of Regional Affairs, and Bureau of Economic and Business Affairs’ Office of Transportation Policy. He also served as president of glifaa, a State Department employee organization supporting LGBTQI+ employees. The opinions expressed here are his own, and not necessarily those of the U.S. government.