After more than two decades of icy Sino-American relations, President Richard Nixon embarked on an historic trip to China in February 1972. Not only did the visit strengthen Chinese-American relations, but it also served to encourage closer ties to the Soviet Union.

Being a member of the official delegation was, of course, a great honor, and everyone did what the White House directed him or her to do. Everyone, that is, except FSO Chas Freeman, who was the senior interpreter, for reasons he explains in this excerpt from his oral history. (You can also read Winston Lord’s account of the diplomacy underlying the trip at the ADST website.) 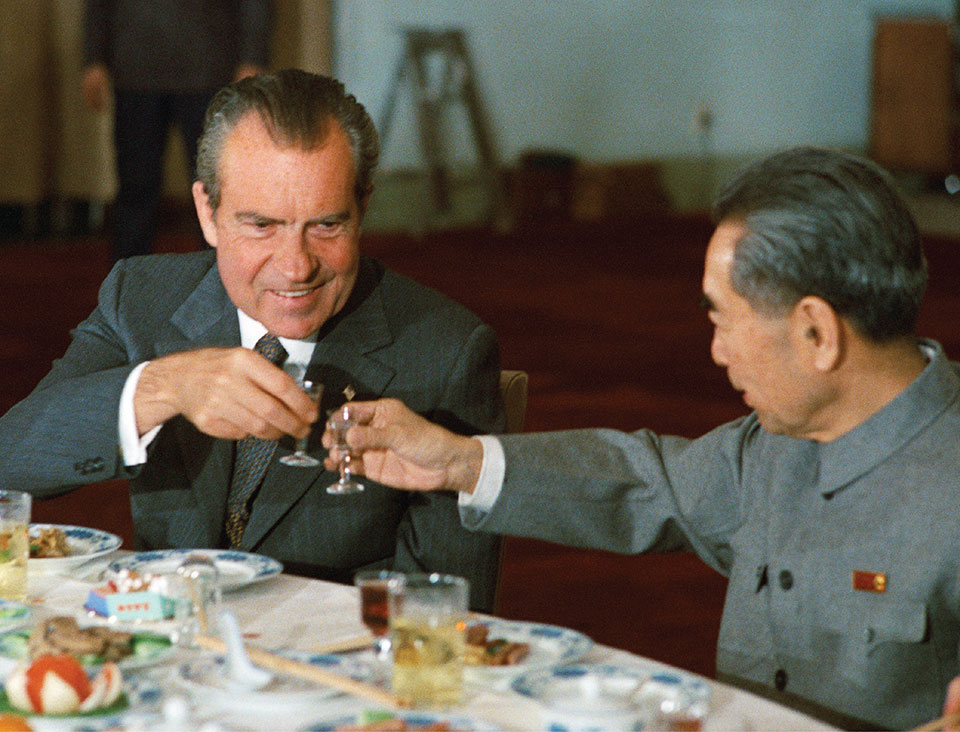 A little after 8 o’clock on the evening of Feb. 21, 1972, the banquet having been moved down to about 9:30, I was called over to the president’s villa. [White House aide] Dwight Chapin came out and said, “The president would like you to interpret the banquet toast tonight.”

And I said, “Fine. Could I have the text, please, so that I can work it over?”

I said, “Well, I know there’s a text; there’s got to be. Chinese is not French or Spanish. One has to consider carefully how this is done if it’s to be done well. I’m sure there’s a text, and I’d appreciate your getting it for me.”

He went into the president’s office, and came out and again said, “There is no text, and the president would like you to interpret.”

I said, “Well, I happen to know that there is a text. And really I must insist on having that text. I have something approaching a photographic memory; I just need to read it once.” Dwight Chapin was the gatekeeper, the appointments secretary, I believe, for the president, later convicted of perjury. At any rate, he went back in a third time, and he came out and said again, “There is no text, and the president orders you to interpret.”

And I said, “Well, it might interest you to know that I did the first draft of the toast tonight, and while I don’t know what was done to it in detail at the National Security Council and by the speechwriters, I do know that some of Chairman Mao’s poetry was inserted into it. And if you think I’m going to get up in front of the entire Chinese politburo and ad-lib Chairman Mao’s poetry back into Chinese, you’re nuts. …”

And he took the text out of his pocket and gave it to the Chinese. And so they had it.

I could see the president glaring at me across the table, with his jowls down and a grim expression on his face.
–Chas Freeman

Later Ji Chaozhu, who did the interpreting, consulted with me on a number of points before he did it. Indeed, it did contain some of Chairman Mao’s poetry, and it would have been catastrophic for me to do it.

As we sat through the banquet, I was at the head table with Nixon and Zhou Enlai and Henry Kissinger and Ji Dengfei and Li Xiannian, later president of China, and, I think, Qiao Guanhua, who was, in fact, the brains in the Foreign Ministry, and [Secretary of State] Bill Rogers, of course, and Mrs. Nixon—interpreting for them. I could see the president glaring at me across the table, with his jowls down and a grim expression on his face, obviously mighty annoyed that I had pulled this stunt.

I have thought a lot about why he might have wished to conceal the fact that there was a text. The fact is that he had a habit of memorizing speeches, and he liked to appear to be ad-libbing them, giving them extemporaneously, which is what Dwight Chapin had told me he planned to do. And I think he was afraid I would stand up there with the text, which I wouldn’t have done, of course.

In any event, he also had a predilection for using the other side’s interpreters, because they wouldn’t leak to the U.S. press and Congress. So all these things came together.

Two days later, after some other things had happened, Nixon apologized to me. He called me over and said, “I’m sorry. I made a mistake. That was wrong. I shouldn’t have done that.” And there were tears in his eyes. Then he did some other things that were by way of making amends. It was odd.

I did not smoke at that time. I had given it up nine years previously, when I was in law school. I remember Li Xiannian, then the sort of economic planner of China, later the president, offering me a cigarette. I took it, and I have smoked ever since. I was terribly nervous.