In one of the most horrific events in U.S. diplomatic history, on the morning of Aug. 7, 1998, suicide bombers parked trucks loaded with explosives outside the embassies in Dar es Salaam and Nairobi and almost simultaneously detonated them. In Nairobi, at least 212 people were killed, and an estimated 4,000 wounded; in Dar es Salaam, the attack killed at least 11 and wounded 85.

Prudence Bushnell, a career FSO, was ambassador to Kenya at the time. She had repeatedly warned the State Department about gaps in the embassy’s security, but to no avail—as she recounts in this section of her oral history. (To see a video interview with Amb. Bushnell, go to usdiplomacy.org; you can also listen to a podcast there. For another perspective, see the Accountability Review Board on U.S. Embassy Nairobi bombing, also available on the ADST website.) 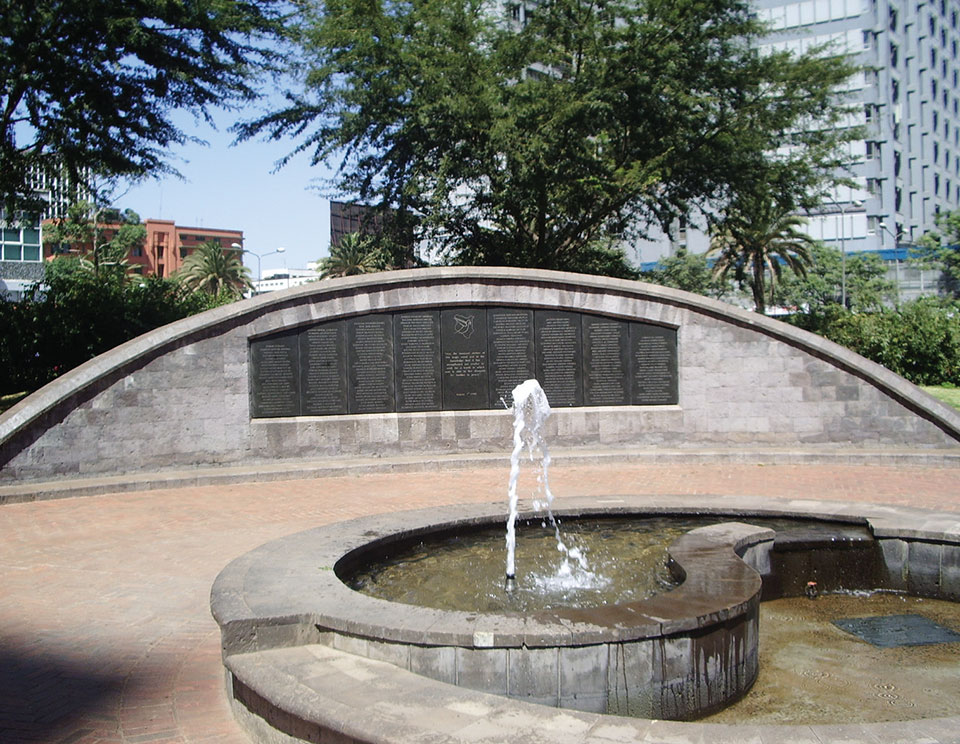 The Memorial Park Embassy bombing site in Nairobi was opened in 2001 to honor those who were injured and killed in the Aug. 7, 1998, terrorist bombing of the U.S. embassy there.
Zweifel / Creative Commons

In the 1990s, President Bill Clinton felt compelled to give the American people their peace dividend, while Congress thought that now that the Cold War was over, there was no need for any significant funding of intelligence, foreign affairs or diplomacy. There were discussions about whether we needed embassies at all now that we had 24-hour newscasts, e-mail, etc. [House Speaker] Newt Gingrich and Congress closed the federal government a couple of times. Agencies were starved of funding across the board.

Needless to say, there was no money for security. Funding provided in the aftermath of the bombing of our embassy in Beirut in the 1980s that created new building standards for embassies and brought in greater numbers of diplomatic security officers dried up.

As an answer to the lack of funding, the State Department stopped talking about need. For example, when we had inadequate staff to fill positions, State eliminated the positions. If there’s no money for security, then let’s not talk about security needs. The fact of increasing concern at the embassy about crime and violence was irrelevant in Washington. So was the condition of our building.

The first day I walked into the chancery, I knew something had to be done. Here was an ugly, brown, square box of concrete located on one of the busiest street corners in Nairobi. We were situated across the street from the train station. Street preachers, homeless children, muggers, hacks and thousands of pedestrians came by our threshold every day. The security offset prescribed by the Inman Report in the aftermath of the truck bombing of our embassy in Beirut was non-existent. Three steps from the sidewalk and you were in the embassy.

In the back we shared a small parking lot with the Cooperative Bank, which was a 21-story building. We may have had about 20 feet of offset from the rear parking lot, but no more. We had an underground parking lot, which was inadequate, and we were squatting on some space in the front, but that was it.

I had learned before I got to Nairobi that the Office of Foreign Buildings Operations, now Overseas Building Operations, was planning [to spend between four and seven million dollars on] renovation of this building that was unsafe and much too small for us. Having spent three years in [the Bureau of] African Affairs dealing with an assortment of disasters, I thought it was dumb to invest more capital in a building that would never be considered safe. There just was no way to protect the building. I suggested that FBO sell it and pool the proceeds with the money proposed for the renovations to buy a new site. Washington’s response was somewhere between “Are you nuts?!” and “Get out of the way, the renovation train has already left the station.”

When they ended with the pro-forma “Is there anything we can do for you?” I angrily declared they could answer the goddamn mail!
–Prudence Bushnell

In 1997, I was told that we were under what was deemed to be a credible threat from a Somali quasi-humanitarian group called al-Haramain. I was also told that the intel side of the Washington interagency community wanted to let things unfold to see where the leads would go. I reported this back to State, along with measures we were taking, but got no response.

When I learned that the arms the group was waiting for were allegedly on their way, I asked the Kenyan government to break up the organization. [Kenyan President Daniel Arap] Moi personally assured me they would comply. Some of the members of al-Haramain were deported and life went on.

Then I got word of a threat from the Lord’s Resistance Army, a rebel group in northern Uganda. Again, we advised Washington and, again, we got nothing back. Meanwhile we continued to do everything we considered reasonable and cautious.

I remember that in early 1998 a delegation of counterterrorist types visited. I met with them in the secure conference room, and when they ended with the pro-forma “Is there anything we can do for you?” I angrily declared they could answer the goddamn mail! The cursing was intentional because I wanted them to see how frustrated and annoyed I was.

When I returned to Washington on consultations in December 1997, I was told point-blank by the AF Executive Office to stop sending cables because people were getting very irritated with me. That really pushed up my blood pressure. Later, in the spring of 1998, for the first time in my career I was not asked for input into the “Needs Improvement” section of my performance evaluation. That’s always a sign! When I read the criticism that “she tends to overload the bureaucratic circuits,” I knew exactly what it referred to. Yes, the cables had been read. They just weren’t appreciated.

In the years since the bombing, I’ve learned just how much I did not know about U.S. national security and law enforcement efforts against al-Qaida. The information was highly compartmentalized, on a “need to know” basis, and clearly Washington did not think the U.S. ambassador needed to know.