The Intermediate-Range Nuclear Forces Treaty marked a turning point in relations between the U.S. and the USSR. Signed in December 1987 by President Ronald Reagan and Soviet Premier Mikhail Gorbachev, the treaty came into force on June 1, 1988. It was the first treaty ever to destroy nuclear missiles, rather than just cap the number each side could possess.

Eileen Malloy was posted to Moscow right after the treaty was signed and worked directly with the Soviet government to facilitate the visits of U.S. inspection teams. In this part of her oral history, she describes an unexpectedly prolonged stay in Siberia in the dead of winter. 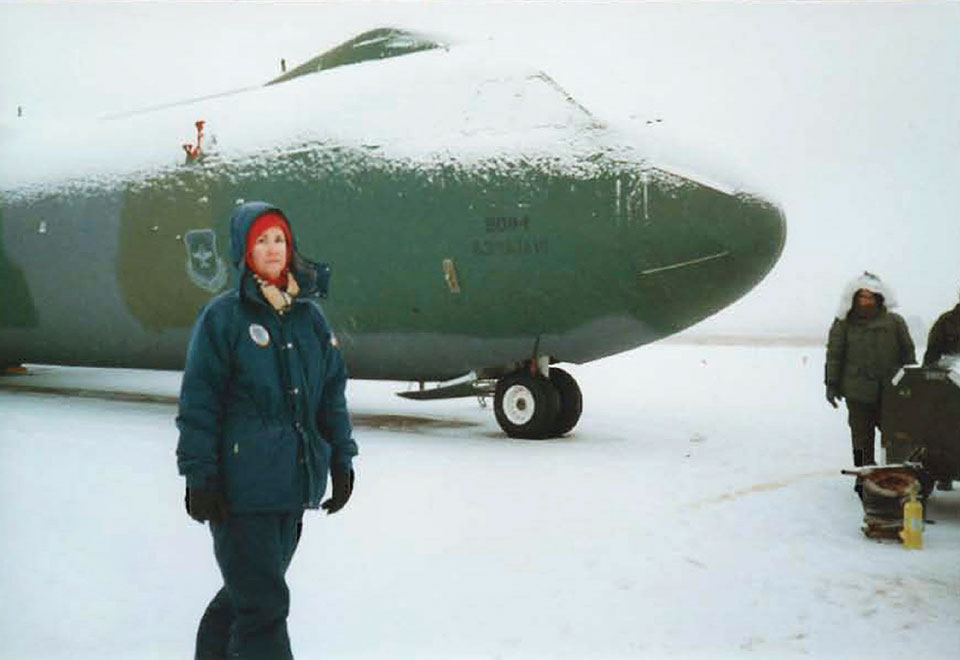 When I arrived in Moscow in January 1988 to take on this huge challenge, the Soviets were not very good about dealing with women—and I was a pregnant female. They just did not know what to do with me at all.

I was there for two years, working with the Ministry of Foreign Affairs and the Soviet Nuclear Military Center to make sure that the American teams who would land at the portal entries to conduct surprise inspections were able to reach their sites. … The teams had to be able to land either in Moscow or the portal that was in Siberia, Ulan Ude; announce where they wanted to go anywhere in the Soviet Union; and reach that location within a certain number of hours. So it was very complex.

We were the ones who translated, met them at the airport, made sure that the U.S. military plane was serviced, just got the whole thing going, and then, whenever there was a dispute, we would conduct negotiations with the Ministry of Foreign Affairs. But it was all virgin terrain. Nobody had ever done this before so we were making it up as we were going along. …

Once, when I had to go to Ulan Ude [in 1990] to meet an unannounced inspection, Captain Sandy Schmidt went with me. The two of us were responsible for all the diplomatic escort duties, which involved getting up an hour before we had to go to the airport to thaw out the Jeep, which was frozen solid because it was minus 30 degrees in the garage. And then Sandy had to do all these complex things to get this Soviet Jeep running. I never learned to drive a stick shift, but fortunately she had.

We got ourselves out to the airport and planned to get the team off to their inspection site, hand them over to their Soviet handlers, and be done with work for two days until the team returned to Ulan Ude. Or so we thought.

We spent two days standing outside, unprotected on the tarmac in Siberia, trying to help the air crew negotiate with the airport authorities.
–Eileen Malloy

The Air Force plane came trembling in over the horizon, this enormous C-130, the big transport plane. It was so cold and the runway was in such bad condition that when it landed it broke a strut. So we got the inspection team sent off, and we started to figure out what to do with the plane. And as fast as we can try and get it repaired, the plane starts to freeze. There were no hangars. It was totally out in the open, in Siberia, in the winter.

Every system on the plane that had any type of fluid started to freeze and break. So the air crew realized the only thing they could do is open every system, just drain everything before it could freeze and rupture. We had to order another plane out of Yokota, and it took two days to get it there with a repair crew.

Sandy and I both speak Russian, but my Foreign Service language instruction did not include aeronautic engineering terms. We spent two days standing outside, unprotected on the tarmac in Siberia, trying to help the air crew negotiate with the airport authorities. I ended up with frostbite across my cheeks. There are some great pictures of us desperately trying to keep warm in all this. We actually got to be pretty good buddies with the airport people through all of this.

The thing that I was most pleased with was the U.S. crew of the plane. They were trapped in Siberia unexpectedly for two days without as much as a change of clothes. We made arrangements for them to get hotel rooms, to be fed, but after that they were bored and wanted to go for a walk. They had not planned even to get off the plane. So they did not have winter gear or parkas to walk around. …

There was a winter ice festival going on with what seemed like the whole town out building ice castles and sliding down these enormous runs of ice on rugs and stuff. The flight crew got into it and they started playing with the local people. They had a great time. I think that little interaction did more for Soviet-American relations than anything else because they actually got to talk to people. People could see that the U.S. military men were not monsters. It was a really hard two days, but it was interesting.

The treaty called for each side to pay for services. For instance when our plane came in, we had a payment that we would make to Moscow for the airport services that we were provided. But that would not actually get to the people running the airport at Ulan Ude. They told me they never saw any of that money. So they had to provide the support, but they did not have enough funding to sustain the services.

I suggested to them that rather than paying a cash amount, why not have the U.S. government send them a used de-icing truck from some airport in the United States? They thought that would be absolutely wonderful. When I got back and recounted this conversation, the Washington policy group slapped me on the hand. I had no authorization to make any such offer, to have any such discussion with the Soviets. We were not here to help them. To me it was the most logical thing. It would have made our operation safer. It was the only way we would know that the money we were paying them for services was actually getting to them. But there was still this reflexive, “We’re not helping the bad guys” kind of thing.

I think in hindsight people realize now that had we started on a more cooperative relationship back then, it might have been easier to mount some of the national security programs that we did after the breakup of the Soviet Union.