A Quote for My Marquee 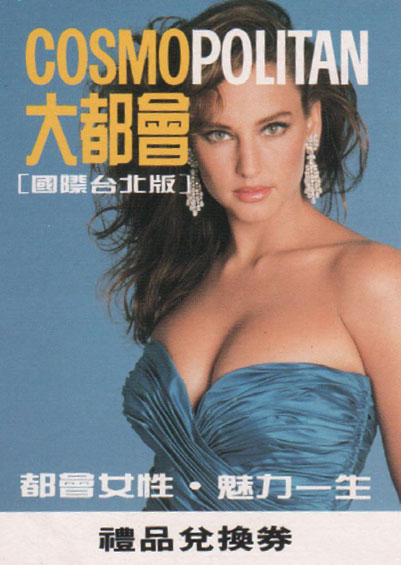 Back in 1989, I was the information officer and spokesman at our non-embassy in Taipei, the American Institute in Taiwan. The front office had received an invitation to attend the opening ceremony for the new Chinese-language edition of a popular American magazine. Neither the AIT director nor the deputy principal officer could attend, and neither could the public affairs officer. The invitation duly landed on my desk.

The magazine? Cosmopolitan. The guest of honor? Its publisher, Helen Gurley Brown.

I was hoping for a quick handshake with the famous “HGB,” a few conversations with contacts in publishing, some clapping when the ribbon was cut and a quick exit. But almost as soon as I entered the reception room at the ritzy hotel, I was taken to the head of the line to meet Ms. Brown and her husband. I remember being surprised at how ruthlessly thin she was.

Then I was pressed to stay for the banquet. In unexpected situations like this, I have always taken the advice of scripture (Luke 14: 8-11) to stand by modestly.

To my surprise, I was not only summoned to the head table but placed at the right of Ms. Brown, with her husband on her left, as the banquet began with Peanuts in Old Vinegar and Spicy Cucumbers.

The members of the Chinese edition’s publishing team were not very talkative, so for two hours Ms. Brown and I chatted. Truth to tell, I was rather intimidated by meeting the real-life figure Natalie Wood had played in the movie version of her famous book, Sex and the Single Girl. While I’d seen the film, I’d never read the book. For that matter, while I had seen copies at the supermarket, I had never read Cosmo, either. What was I supposed to talk about as we enjoyed the Four Treasures in Bird’s Nest?

Fortunately, my wife was a subscriber to Working Woman magazine, and I had looked through a few copies. So I asked what magazines were Cosmo’s main competitors, and was Working Woman among them? I quickly learned a great deal about the overlapping demographics and marketing of the two publications, all of it fascinating. But as the Abalone was being served, Ms. Brown turned the tables by asking, “So what do you think of Working Woman?”

Thinking fast, I said that the magazine illustrated basic principles of management, human relations and office culture in everyday ways, but with a twist. Its take on these basic topics was that old-boy networks hid this knowledge from women, and now Cosmo was sharing the secrets with ambitious women. This was apparently different from anything HGB had heard from others, and again I was given some valuable high-level insight into publishing and branding.

Now, however, I could feel another panic attack coming on. As the Steak with Five Spices arrived at our table, I realized I’d played my only conversational card on the subject of women’s magazines, and my ignorance would soon become evident. Undaunted, I turned the conversation to intellectual property and the extent of book and movie piracy in Taiwan. She was quite interested, and at the mention of pirated videotapes of American blockbusters, her husband David, director of “Jaws,” joined in. That discussion lasted through the Fish Fragrance Eggplant.

The dinner continued, and I tapdanced and pirouetted about the economy, political change in Taiwan, Chinese regional cuisines, the end of the Cold War and more. As I remember it, each of my topics informed and entertained without revealing my lack of depth.

After the Sweet Sesame Balls, the meal concluded with Melon Slices. When the dinner ended, HGB said to me, “Donald, you’re one of the best conversationalists I’ve ever met.” Heady stuff for a colorless diplomat!

If only FSOs had marquees rather than resumés, perhaps that quote, in lights, would have been just the ticket I needed to reach the Foreign Service stratosphere. I’ve always thought “Principal Deputy Assistant Secretary” has a nice ring to it. But alas, there’s no Bureau of Conversation.

Donald M. Bishop, a retired Foreign Service public diplomacy officer, was public affairs officer in Dhaka, Lagos and Beijing, and twice a political adviser at the Pentagon. His last assignment was Kabul.