When it comes to benefits, many of us at some point have been disappointed by how differently the Foreign Service is treated compared to our military.

But there are a lot of similarities. Aside from promoting our values and strengthening America’s position in the world, both uniformed military and Foreign Service members move around a lot, serve in conflict areas and sometimes live far from loved ones.

About one-third of Foreign Service members have served in dangerous countries that may require unaccompanied tours, according to department estimates.

Advocating for the Benefits of SCRA

These include the ability to maintain or change legal residence (which has implications for taxes and in-state tuition fees) and end, without penalty, housing leases and telephone, cable and internet contracts, among many other issues.

To be frank, it is unlikely that there is the political will in Congress to extend all SCRA protections and benefits to Foreign Service members, so AFSA has not focused on getting a wholesale change.

At the same time, several sections of the SCRA would offer FS members significant relief, given their frequent moves, temporary duty stints in the Washington, D.C., area, and choice of domicile or residence. And the overall impact on state or local tax revenues would not be great since FS numbers are miniscule compared to service members.

So, working with the Senate Foreign Service Caucus, the newly formed House Diplomacy Caucus and individual lawmakers, we continue to advocate a few key extensions of the SCRA to our members.

These include residential and motor vehicle leases that would permit our members who need to break their leases to be posted abroad, or who need to return to the United States on short notice for a variety of reasons (including post evacuations and health grounds), to do so without penalty.

We are also pushing to allow FS members to terminate mobile phone and other contracts or unlock their phones prior to a posting abroad; and to ensure that FS members who find themselves temporarily in a jurisdiction in the Washington, D.C., area for detail or training can retain residence in their state of domicile for tax reasons.

While we push for these changes at the federal level, we will continue to work with individual states, landlords and others to provide relief. AFSA cannot promise all issues will be resolved, but we do send letters to these parties and raise concerns with department management on behalf of our members who need assistance in breaking leases or other contracts because of official overseas travel orders.

We do the same with in-state tuition, and there have been some successes. In 2019 the Virginia State Assembly passed a law that now considers the dependents of FS members eligible for in-state tuition if the FS members reside in Virginia for at least 3 months (compared to the general residency requirement of 12 months) and immediately go overseas.

In December 2019, after AFSA sent a letter, the University of Texas-Austin granted in-state tuition to the children of one of our members.

While we are on the subject, AFSA is still waiting for the last and final tranche of overseas comparability pay to complete a process and commitments made by Congress in 2008 and 2009. Again, our military colleagues, along with those in the intelligence community, get the full amount.

As former AFSA President Barbara Stephenson pointed out in a 2016 article in Federal Soup: “When our members deploy abroad to embassies alongside their military and intelligence community colleagues, the only member of that trio to take an 8-percent cut in basic pay is the one from the Foreign Service.” The cut in basic pay for 2020 is now just over 10 percent. 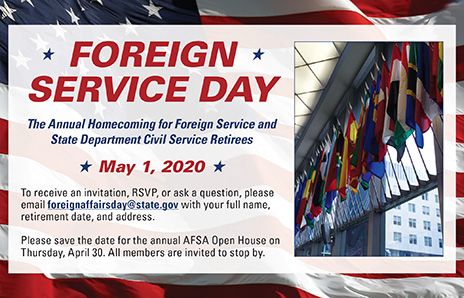