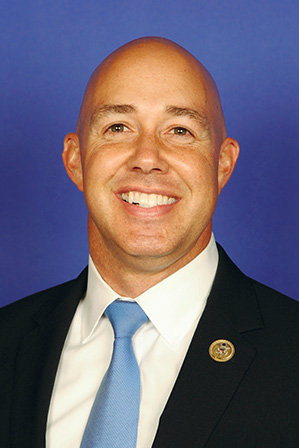 The most important and rewarding time of my life was the 12 years I spent in the U.S. Army. I became a bomb technician because I wanted to save lives and serve a cause greater than myself. I nearly gave my own life for that—I lost both my legs and a finger when a roadside bomb detonated beneath me—and have known more heroes than I can count who died defending others.

The selfless commitment of my brothers and sisters in arms, both on and off the battlefield, makes me truly believe that it takes a special kind of person to dedicate their life to serving our country.

Members of the U.S. Foreign Service make this commitment each and every day to spread the values of freedom, democracy and liberty around the globe.

In the current environment of great power competition and rivalry, I strongly believe that we need to upgrade our diplomatic capabilities and support them fully to match our adversaries around the world.

In particular, we need to address the documented shortage in core diplomacy positions overseas. To this end, I have strongly urged the House Appropriations Subcommittee on State and Foreign Operations to encourage the State Department to create and fill new Foreign Service positions at overseas posts.

In my letter to the State Department, I specifically encouraged the agency to expand mid-level FSO positions—grades FS-3, FS-2 and FS-1—at overseas posts. Our goal must be to ensure that full complements of U.S. diplomats are staffing country teams, deployed around the world promoting U.S interests. I believe the documented deficit in overseas core diplomacy positions is a serious problem that needs to be addressed to ensure that America’s commercial, economic and political standing in the world does not atrophy or give way to rising near-peer competitors.

I believe the documented deficit in overseas core diplomacy positions is a serious problem that needs to be addressed to ensure that America’s commercial, economic and political standing in the world does not atrophy or give way to rising near-peer competitors.

That’s why it was so important to get this language included in the appropriations package that passed the House on Dec. 17, 2019, and was signed into law by President Donald Trump three days later.

Unfortunately, we are also all too familiar with just how often artificial barriers or needless government bureaucracy gets in the way of those who want to serve. For example, Foreign Service officers are currently forced to take home leave on returning to the United States between assignments and often find themselves without any means of housing. This is simply unacceptable, especially when anyone who is serving or has served in the military can tell you we have hotels and vacation rental homes on bases across the nation.

The good news is that this bill was included in the National Defense Authorization Act for 2020, which passed the House of Representatives on Dec. 11 and was signed into law on Dec. 20, 2019.

The bottom line is that we must continue working hard to ensure the safety and security of the United States through strong diplomacy, robust funding for our military, unwavering support for our allies, and development of a comprehensive national security strategy founded on the idea that the world is safest when America is strongest.

Thank you for all you do to promote peace and democracy around the globe. Your commitment to service before self continues to inspire me, and I look forward to working with you in the future to preserve our nation’s security for generations to come.

Representative Brian Jeffery Mast (R-Fla.) represents Florida’s 18th district. He serves on the House Foreign Affairs Committee and on the House Transportation and Infrastructure Committee. Born and raised in Grand Rapids, Michigan, he served in the U.S. Army from 2000 to 2012.