During the decade between 1966 and 1975, more than three million Americans, each spending anywhere from a few months to several years, cycled through South Vietnam, a country of approximately 26 million people (the reunited country in 2014 has a combined population of an estimated 90 million). This massive influx had an enormous impact, some of it anticipated but most unforeseen.

I arrived in Saigon in March 1969 to join the embassy’s consular section, not long after President Richard Nixon announced that the United States would begin drawing down from the high-water mark of approximately 550,000 troops flanked by a sea of civilian contractors. A huge construction projects consortium (RMKBRJ—Raymond International, Morris/Knudsen of Idaho, Brown & Root of Texas and J. A. Jones of North Carolina) was busy building major infrastructure to support military operations.

The combat soldier (tooth) to military support personnel (tail) ratio has escalated in every successive war, reflecting the needs of increasingly sophisticated technology and expanding missions. In Vietnam a very large tail had more time and space for interaction with Vietnamese citizens.

Embassy Saigon had already become our largest post in the world, encompassing an enormous U.S. Agency for International Development mission and a Civil Organization and Revolutionary Development Support program. The job of CORDS was to “win hearts and minds.” The program was staffed, in part, by first- and second-tour Foreign Service officers.

South Vietnam was often referred to sardonically as the “Land of the Big PX.” U.S. government economists had determined that a large military post exchange offering every product imaginable (even fur coats and very expensive jewelry) would absorb much of the salaries and financial incentives paid to U.S. civilian personnel and contractors.

As an incentive to join what ultimately became a coalition of more than 30 countries (the most prominent being a large contingent of South Korean combat troops, but ranging down to a small military medical ambulance unit from Iran), access to the PX was offered to all coalition members. The unintended result was a booming black market for goods alongside the one for currency.

This large international presence also generated a great deal of business for the small consular section, which consisted of a consul general, a consul and three vice consuls. The embassy did not issue non-immigrant visas because Vietnamese citizens required exit permits, which were rarely granted for non-official purposes by a beleaguered government that did not want its citizens voting with their feet.

Consequently, the consular section’s operations were limited to American Citizen Services, which primarily handled deaths and estates, the issuance of immigrant visas to war brides and the processing of adoptions; and performed notarial services.

Reflecting its French colonial heritage, Vietnam’s justice system required registration in the district of residence and bearing of an identity document commonly referred to as the “Family Book.” American military personnel did not have passports, so the government accepted what GIs referred to as “the embassy’s permission to get married”—which was actually their own sworn affidavit attesting to their identity and civil status (if previously married), notarized by the consulate. The U.S. military required its personnel who wanted to marry to go through the whole procedure for both the Vietnamese exit visa and the U.S. immigrant visa before granting permission.

As one might imagine, this was a very time-consuming, arduous process involving a birth certificate, police clearances, a medical exam, etc. U.S. soldiers were on a one-year rotation, so many did not complete it. If they managed to gain military permission, they then had to start the formal application process, which required renewing much of the paperwork whose limited validity had expired.

If the couple did not get married in Vietnam, the fiancée as an intending immigrant was not eligible for a visitor’s (B-1/B-2) visa. However, there were no immigrant visa numbers available at this time in the category which applied to their cases. This Catch-22 situation in 1970 applied to 100 or so fiancées, and generated considerable congressional correspondence.

One day the head of the Consular Affairs Bureau’s Visa Office called from Washington, D.C., to order the issuance of a visitor’s visa to one of these cases, citing the interest of a very senior U.S. senator. The consul general responded that on the grounds of equity and fairness, the consulate would take that as an instruction to issue visitor’s visas to all of the fiancées in limbo. The Visa Office backed off the request, but that situation eventually led to the establishment of the “K” (fiancée) visa category. (In 1970 non-immigrant categories A–J existed; as of 2015, the list goes through V.)

Embassy Saigon had already become our largest post in the world.

Westerners’ linear, legalistic approach to life’s problems was not in alignment with a culture where the highest value and importance was placed on family. The opportunity for “fraud,” as defined by consular visa regulations, was all too easy in a country where all one needed to obtain a birth certificate was finding two people who would attest that they knew who you and your parents were without any further corroboration.

This became a real headache in adoption cases. All children in Vietnamese orphanages were not necessarily orphans. The exigencies of a long war meant that children with one or even two parents living might be placed in the care of others temporarily. In some cases children may have been placed for adoption either unwittingly or because the surviving parent(s) hoped to ensure a better existence for at least one of many siblings.

One example highlights how one person’s “fraud” is another’s fulfillment of his or her responsibility to care for and nurture the extended family above all other considerations. A middle-aged U.S. contractor had satisfied all the requirements to obtain immigrant immediate relative visas for his Vietnamese wife and her 5- and 7-year-old daughters by her deceased former husband, a Vietnamese army officer. The momentous day for visa issuance arrived. The consular assistant pointed out a notation on the wife’s medical exam stating that “Applicant had a complete hysterectomy 10 years ago.” When confronted with this anomaly, the husband explained that the girls were his wife’s two orphaned nieces. As she considered herself now their mother, he had obtained birth certificates to that effect.

By some miracle, this happened during the only period in 16 months when two non-preference immigrant visas were available. This allowed the family to complete the process on slightly different terms and leave before the three exit visas expired.

Many Filipinos were hired by U.S. contracting firms. After several years of working in Vietnam, they would appear at the consular section with documentation certifying their service working for the U.S. government at the Subic Bay Naval Base near Manila for 13 or 14 years. That made them eligible for the special immigrant visa available to foreign national employees of the U.S. government. Although originally intended to reward only extraordinary service, over time it has come to be viewed as a benefit by all who complete the required 15 years of service.

Sadly, the Filipinos learned that their service with Pacific Architects and Engineers or other U.S. contractors did not satisfy the 15-year requirement. They had great difficulty in understanding why what looked to them exactly like U.S. government employment legally was not. Even though they were making more money in Vietnam, they felt they were letting down their extended families, who were counting on them to achieve legal residence in the United States and then seek immigrant visa status for their parents and siblings.

By October 1970, when I departed Vietnam, about 350,000 U.S. troops remained in the country. Embassy Saigon was busier than ever. And though I never again served in Asia, my involvement with Vietnam was not yet over. Here are three vignettes I recall vividly from my later Foreign Service career.

Washington, D.C., 1982: I attend the National War College, whose curriculum includes, for the first time since 1975, a two-week segment on Vietnam. The move came at the insistence of several faculty members who said it was past time for study of the war’s lessons. The NWC staff who had argued for further delay were proven right when the heated discussion destroyed the camaraderie carefully cultivated among the student body over the previous months.

Not the least of the surprises was the astonishment among military students when their State Department colleagues noted that between 1966 and 1975, a higher percentage of Foreign Service officers than military officers served in South Vietnam. (Admittedly, large troop deployments were also garrisoning in Germany, Italy and South Korea, among other overseas duty stations.)

Brussels, 1995: The U.S. ambassador to Belgium, where I was serving, receives a group of five new Marine security guards, one of whom is clearly of Vietnamese origin. In the ensuing chat, the Marine reveals that as a 6-month-old child, he had arrived in the United States with his refugee parents, who fled via boat after the fall of Saigon. With heartfelt emotion he exclaims, “I am very proud to be a U.S. Marine.”

Quantico, Virginia, 2010: I hear a retired general assert that we talk about lessons learned, but they are only lessons observed. They do not become lessons learned until we apply them. 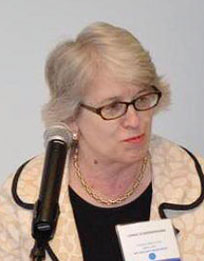 Lange Schermerhorn joined the Foreign Service in 1966 and retired in 2001. She spent her first tour as a rotational officer in Colombo, and then served as a vice consul in Saigon from March 1969 through October 1970. She was ambassador to the Republic of Djibouti from 1998 to 2000. Other assignments included Tehran, London, Brussels (twice), the State Department’s Secretariat and other Washington, D.C., assignments.