The April issue marks the 40th anniversary of the evacuation of the U.S. Embassy in Saigon. Members of the Foreign Service reflect on their experiences in Vietnam 40 years ago – whether serving at the Embassy or in regional diplomatic outposts – as well as examining Vietnam today. Ambassador (ret.) Allan Wendt recounts his story of the 1968 Viet Cong attack on Saigon. Two articles, from retired FSOs Parker W. Borg and Joseph McBride, recall how a small group of diplomats in D.C. and Saigon took matters into their own hands in order to save the lives of thousands of Vietnamese. Anne D. Pham recounts her journey from Vietnam refugee to State Department official and her quest to find the FSO who helped save her life.

Former State Department consultant Rufus Phillips considers how counterinsurgency efforts in Vietnam can influence the work of policy makers today, and CSIS Scholar Murray Hiebert and retired Ambassador Parker W. Borg observe the changes in Vietnam over the last 40 years. Bruce Beardsley recounts his experience as a young FSO charged with overseeing massive refugee efforts in the aftermath of the Vietnam War, and retired Ambassador Lange Schermerhorn remembers her days as a makeshift social worker in wartime Vietnam. Finally, retired Ambassador Kenneth Quinn recounts his experience going from on-the-ground work in Vietnam to the National Security Council under Henry Kissinger.

Elsewhere in the issue, Amelia Shaw examines how a well-intended clause in our immigration laws has had the unintended consequence of disadvantaging unwed, mostly Mexican, mothers. AFSA President Bob Silverman wonders how the Foreign Service can find and cultivate its next Bill Burns, and former FSJ editor Steve Honley pens an appreciation of former AFSA President and FSJ Editorial Board chair Ted Wilkinson, who passed away earlier this year. 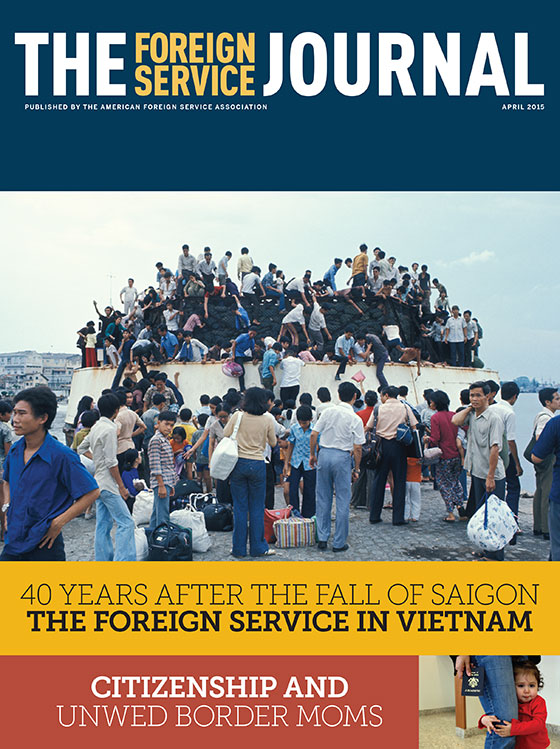 Allan Wendt was a junior FSO on night duty when the embassy was attacked by Viet Cong commandos. This is his story.

From Whitehouse to the White House

From the vantage point of both the field and the National Security Council, one FSO shows the critical role the Foreign Service played in a difficult environment.

At the State Department, a small group of FSOs worked outside normal channels to prevent a potential human tragedy.

With the fall of South Vietnam looming, and an ambassador still in denial, FSOs on the ground began taking matters into their own hands to help get people out, by any means possible.

Finding My Heroes, Finding Myself: From Refugee Child to State Department Official

Amidst the chaos of the last days in Saigon, U.S. government personnel risked their lives to save Vietnamese.

Counterinsurgency in Vietnam: Lessons for Today

Now known for its dynamic economy, Vietnam has slowly but surely taken its place among the nations of the world.

Return to Vietnam: Observations in 2015

Forty-five years after serving there, one veteran FSO encounters the new Vietnam.

How to Find the Next Bill Burns

Citizenship and Unwed Border Moms: The Misfortune of Geography

On the Foreign Service in Vietnam