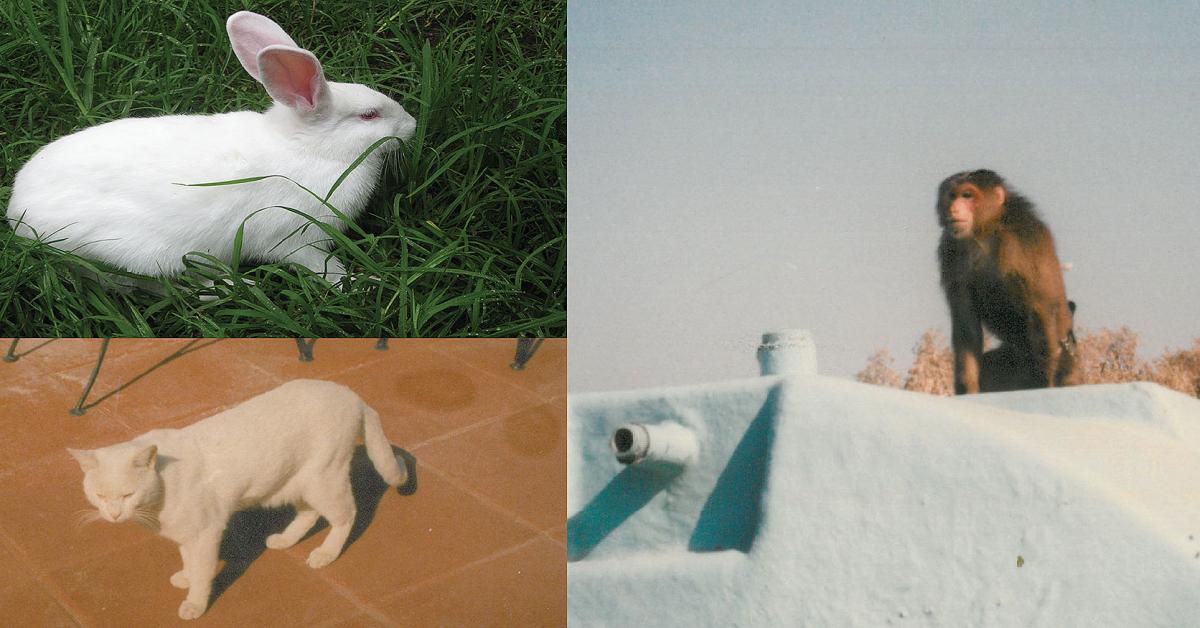 Foreign Service friends: a white rabbit, standing in for Updike, who was sacrificed for the stew (top left); Safira, the Marines’ mascot (below); and Anastasia, the DCM’s pet monkey.
Courtesy of Anthony Quainton

Foreign Service life brings us into contact with all sorts of people—rich and poor, powerful and powerless, amusing and dull—who must be sought out, entertained and endured. Fortunately, it is also filled with pets and other animals, both ours and other people’s, whose presence reflects important dimensions of the Foreign Service experience.

So it was with my family, which had a total of three pets during my diplomatic career: a turtle named Peter, a rabbit named Updike and a Lhasa Apso named Sengtru.

We carried Peter across the Pacific in a plastic bowl, complete with a plastic palm tree. He survived a typhoon and was carried through customs at various ports of entry en route to New Delhi, to the amusement and consternation of numerous officials.

There Peter lived the usual solitary life of his species until he was left alone in the care of our bearer and cook, while we traveled by train around Rajasthan. Sadly, unlike small American boys, Indians do not love turtles, and Peter’s life was soon cut short by inattention.

Updike the rabbit also met an untimely demise, in Nepal, where I was deputy chief of mission (DCM). A beautiful white animal, he was the only pet of Elizabeth, our younger daughter, who was then 8. Updike lived in a hutch behind our residence in Kathmandu, where he was attended faithfully both by Elizabeth and by the residence servants.

The few Western cultural activities in Nepal included a small amateur theater company, the HAMS (which stood for “Himalayan amateurs”). One of our many productions was Arthur Miller’s The Crucible, in the second act of which John and Elizabeth Proctor have rather insipid rabbit stew for dinner. When it came time to host the cast party I, as co-director of the production, opened up my home and proposed that, in the spirit of the play, we serve rabbit stew.

Our cook, who belonged to the butcher caste, dutifully went off to the market and bought the necessary ingredients. Most of the cast enjoyed the meal, although some of the American guests objected to the very idea of eating rabbit.

The next day Elizabeth went out to feed Updike, only to find another less attractive bunny in the hutch. It appeared that we had eaten our daughter’s pet! How could this have happened when everyone knew of her affection for Updike? The answer only became clear a week later when, instead of one white rabbit, there were now seven: a mother and six thumb-sized babies. It turned out that our cook had decided to spare the life of a pregnant rabbit by sacrificing Updike.

The DCM had come up with a scheme to organize a banana-eating contest between his pet monkey, Anastasia, and the Marine security guards.

Despite that trauma, rabbits remained an important part of our daughter’s life. At Princeton she acquired another one, which she named in honor of Colonel Coniglio, our military attaché in Managua. The Colonel, as we affectionately called him, lived (illegally) in her dorm rooms, and accompanied her home to Washington, D.C., for the holidays.

A rabbit straight from the pages of Alice in Wonderland, he supplied live decoration on our back lawn, to the great admiration of family and guests. Happily for the Colonel, his only mishap was a brief escape into the neighborhood, before a young neighbor found him a block away and returned him. He lived out most of his life in Elizabeth’s dorm room.

Lions and Monkeys, Oh My!

Our third pet was a Lhasa Apso named Sengtru (Little Lion), which we bought in Kathmandu and brought with us to Bangui, my next posting. Her insistent bark alerted us to the arrival of guests and unwanted strangers. Unfortunately, she was run over in Washington, D.C., when she escaped from the house during a dramatic and powerful thunderstorm, which had terrified the little animal. She is buried in an unmarked grave in our backyard.

Colleagues also had pets. For instance, my DCM in Kuwait had a pet monkey named Anastasia. She was a regular feature at the American community pet show, held in the embassy compound each year. Like all monkeys, Anastasia had a certain manual dexterity, and at an afternoon barbecue which the DCM hosted, her talents were put to the test. The DCM had come up with a scheme to organize a banana-eating contest between Anastasia and the Marine security guards. Two of them agreed to take part. They and Anastasia sat on the wall of the DCM’s garden, where each was given an unpeeled banana to eat. Needless to say, Anastasia won hands-down.

In Kuwait the embassy compound, which had been bombed only a few months before our arrival, was bedeviled by feral cats that lived under damaged, bombed-out buildings. The best-known of these was a scrawny white cat whom the Marines had found badly injured and nursed back to health. Christened Safira (Madam Ambassador), she became their mascot and had the run of the compound.

Safira proved quite popular with local male cats, as well, so we soon decided to curtail her reproductive capabilities. The only catch was that in Kuwait, neutering animals was against Islamic law and illegal. However, under the protection of ambassadorial authority and diplomatic immunity, we decided to sneak an Egyptian veterinarian into the residence one Sunday to perform the necessary operation. The cat was duly captured, and the vet performed the procedure on our kitchen table, to the horror and amazement of the servants. Safira went on to live a sheltered, if infertile, life, for the remainder of our tour.

Why Do Greyhounds Lose?

Animals first entered my Foreign Service consciousness not as pets, but as visa applicants. As a new consular officer in Sydney, I was approached by two men for visas for their greyhounds. (Technically, of course, the visas were for the men, as they were planning to accompany their dogs to San Diego to race at the local track.)

I knew little about greyhounds or the challenges of their life, even after spending an evening at the Sydney dog track. So the two applicants explained the system. These dogs were not expected to win, but to lose. The problem is that a fast greyhound will always win and hence return very little money on a bet. The challenge was to make the greyhound lose repeatedly, so that future odds would increase.

One crude method, which my applicants thankfully disdained, was to put some astringent substance on the trainer’s hand, with the aim of getting some of it into the eye of the dog as it was being put in the starting box. The dog would be temporarily disoriented, and before he could fully recover a rival would win. A more sophisticated method was to take your dog swimming at Sydney’s Bondi Beach. The dogs enjoyed the sea, but became exhausted from struggling with the surf. And an exhausted greyhound never won a race.

I issued the visas, but vowed never to bet on the dogs, however popular dog racing might be among Australians. (It was often said that Australians were so addicted to gambling that at the dog races they would even bet on the bunny.)

As the maharajah proudly declared, the motto of his princely state was “Bikaner by the Grace of Grouse.”

Just as dogs have to travel, so, too, do buffaloes. One of the challenges I confronted as the India desk officer was making arrangements for the shipment of an American bison to an Indian zoo. The size of the shipment made its handling extremely complicated; trucking was expensive and air travel even more so. But eventually I overcame the obstacles and a live example of American culture successfully reached India.

Birds of a Feather

A further complication is that not all animals are legal pets. After 18 months of captivity by guerrillas in the jungles of Colombia, Peace Corps Volunteer Richard Starr emerged with a pet parrot. Starr, whose captivity had drawn the attention of the U.S. media, refused to come home unless he could bring the parrot, his sole companion during the long months of his captivity.

However, U.S. law prohibits the importation of parrots, which are classified as an endangered species. So Embassy Bogotá faced a major public relations disaster if Starr could not be persuaded to return home on the special military flight which had been sent to retrieve him. Happily, the State Department’s counterterrorism desk persuaded the Pentagon to fly Starr and his parrot to a secure military facility in Florida, where the prying eyes of customs and immigration officials would not notice his avian companion.

During my tour in New Delhi, I discovered that birds have an important place in Indian history. On a visit to the Rajasthani city of Bikaner, I called on the maharajah in his palace, a 19th-century extravagance filled with hunting trophies. We were asked to join him on his skeet shooting range for tea.

As we made polite small talk, he explained the importance of shooting for his family. In Bikaner, there is a small lake to which each winter imperial sand grouse migrate from Siberia by the millions. It was a favorite hunting spot for British officials, including several viceroys. The result was that Bikaner always got preferential treatment in dealing with the British authorities. As the maharajah proudly declared, the motto of his princely state was “Bikaner by the Grace of Grouse.”

Not all animals are benign, of course. In the Central African Republic, for example, dead animals can send a powerful message. Once an agitated local employee came to see me to report that a plot to assassinate the country’s ruler, Field Marshall and President-for-Life Jean Bedel Bokassa (later Emperor Bokassa I), was afoot.

When I asked for details, the employee told me that a dead chicken had been found in the center of the presidential palace courtyard. And if that wasn’t a sign—if not the agent—of an assassination attempt, nothing was! Needless to say, Bokassa was unhurt, so I decided not to report the incident. But I later heard that he, too, saw the chicken as the portent of an assassination attempt.

I even had a memorable encounter with a mechanical animal in Kuwait, where our enterprising commercial counselor had organized a trade show at a local hotel. Representatives of many American companies had booths, but the centerpiece of the show was the Marlboro Bull—a mechanical device that bucked and twisted from side to side with the intention of testing those brave enough to test their bronco-busting skills.

Needless to say, the American ambassador was expected to lead the way. So, attired with a donated 10-gallon hat, I dutifully took my seat on the bull, and gamely held onto the pommel for dear life. Delighted Kuwaitis watched as the speed of the bull’s gyrations was ratcheted up until I was ingloriously thrown to the floor.

In short, at every post and back in Washington, D.C., animals played a part in my diplomatic career—sometimes benignly, sometimes not. They enlivened our lives, added moments of pathos and sorrow, and reminded us that diplomats can be winged, pawed, furry or feathered. 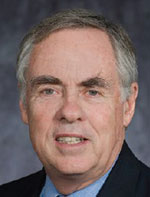 Anthony C.E. Quainton, a retired Senior Foreign Service officer, is currently Distinguished Diplomat-in-Residence at American University. He served as ambassador to the Central African Republic, Nicaragua, Kuwait and Peru, and as assistant secretary of State for diplomatic security, among many other assignments. 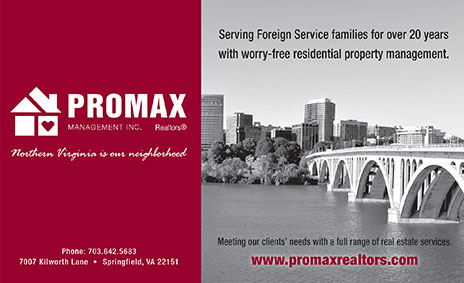 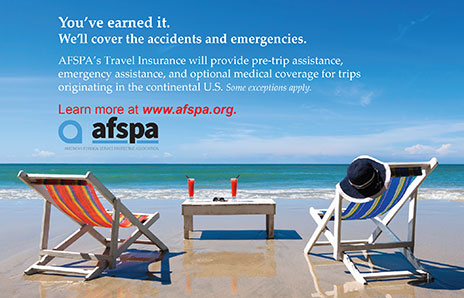 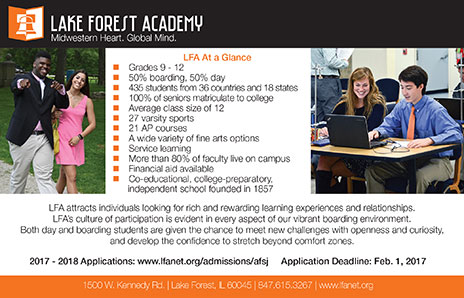 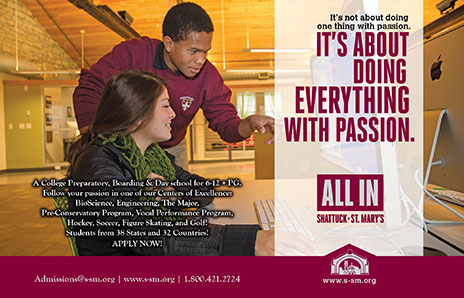