The Foreign Service Journal > October 2020 > From the FSJ Archive: The McCarthy Years Inside the Department of State

The following is excerpted from an article by the same title in the November 1980 Foreign Service Journal. The article carried this note about the author: “John W. Ford, is a retired Foreign Service officer. Over twenty-seven years ago Mr. Ford held the position in the Department of State which today is that of deputy assistant secretary for security. Mr. Ford occupied his position at the height of the campaign of the late Senator Joseph McCarthy against alleged communists in the US government and at the time was under frequent subpoena by McCarthy, various congressional committees and a New York grand jury. He was threatened by the McCarthy committee staff with contempt of Congress for alleged interference with a congressional witness who took to the McCarthy committee material from security files of the department on some of our highest-ranking Foreign Service officers. Eventually Mr. Ford was placed on indefinite probation and removed from his position.” 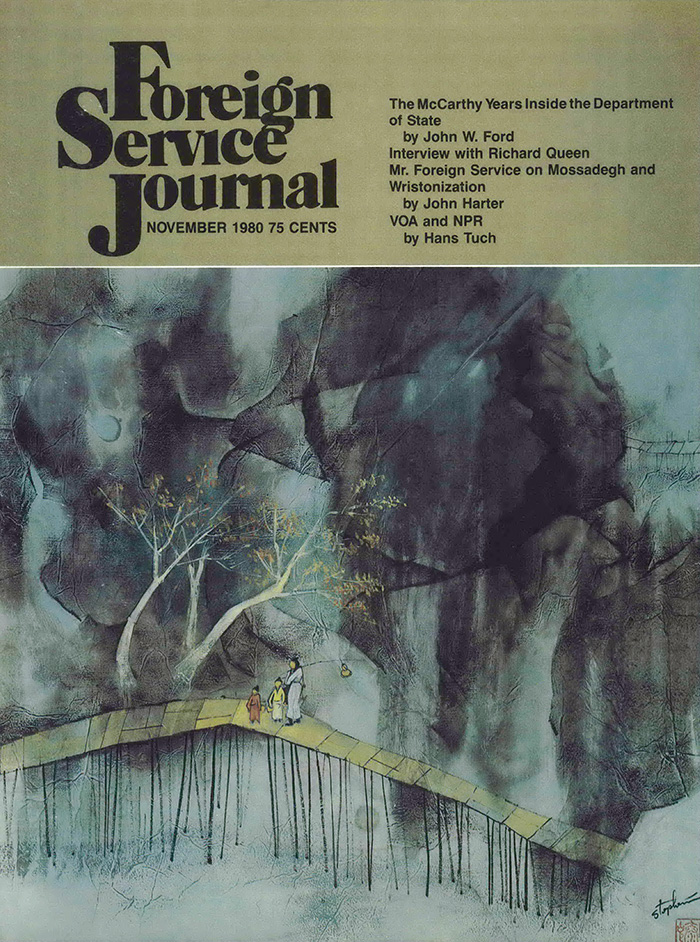 Few people who lived through the McCarthy era in the Department of State can ever forget the fear, intimidation and sense of outrage which permeated Foggy Bottom. As an officer of the Foreign Service (now retired), I found myself caught up in that political whirlwind in which reputations were placed in jeopardy, integrity questioned, and disloyalty frequently presumed rather than proven.

Most of us had for guidance during that period only our own moral principles and convictions and above all our belief that the American people would demand fair play and due process. In the long run this proved correct. In the short run though, many fine, loyal, decent, courageous officers of our domestic and foreign service suffered frightful traumas.

The public mood of the United States in the early 1950s was hostile to diplomacy generally and to diplomats specifically, a situation we tend to forget but one brought home to me with frightening suddenness on my return from Paris to Washington in late 1951.

ABC Anchorman Frank Reynolds captured a part of that mood most vividly this past Foreign Service Day when he observed that his audience “needed no reminder of the painful fact that distinguished public servants, Foreign Service officers of great integrity, have in the past been punished and even banished from the Service for daring to report to Washington what Washington did not wish to hear, and reporting with detachment and accuracy and sometimes indeed with prophesy the meaning of political and military events abroad that did not support the domestic political positions of higher officials in this country.”

It was a period when Senator Joseph McCarthy had reached the height of his power and he was feared by the highest echelons of the United States executive branch. “Positive loyalty” was demanded by our highest officials in the Department of State. As happened in my case and that of other colleagues, following an appearance before Senator McCarthy there was loosed a flood of letters and postcards directed toward “unfriendly” witnesses and containing the repeated taunts of “communist,” “traitor,” and “red rat.”

In March of 1951, I was on special assignment to the USSR in the combined interest of the British, Canadian and United States governments and their embassies in Moscow—to search for and hopefully uncover the latest clandestine listening device being used by the Soviets—a miniature electronic microphone, activated by a radio from some distance away. My traveling companion, Joseph Bezjian, worked for me as electronics technician. Months later he was honored by the Department of State for his fine work which led to the discovery of an advanced miniature listening device hidden in the Great Seal of the United States—a wooden replica hanging in Spaso House, the ambassador’s official residence.

This seal was expertly carved, and beneath the eagle’s beak were barely visible pin holes made by a jeweler’s drill which admitted voice waves to the diaphragm of the miniature microphone. For this and other ultimately successful assignments I was “rewarded” with a Washington job. Little did I realize then what a return to Washington would mean with Senator Joseph McCarthy producing random lists of alleged communists within the Department of State and the Foreign Service.

First, however, with the late Charles E. (“Chip”) Bohlen, who would soon become a prominent target of the McCarthy campaign, and with key officials of the Department of State, I conducted briefings concerning the Moscow “find.”

The most memorable of these briefings was with Secretary of State Dean Acheson who also was to become one of McCarthy’s favorite targets. …

As I settled into the Washington job the cold war was raging in full. The laws of evidence that I had learned in law school were being totally disregarded and replaced by massive presumptions of guilt—from personal as well as institutional associations. …

Senator Joseph McCarthy and certain other members of Congress questioned the nomination by the Eisenhower administration of Chip Bohlen to be the next ambassador to the Soviet Union. … The most highly advertised bit of “evidence” was a tape recording, allegedly containing Ambassador Bohlen’s voice. This tape purportedly implicated him in activities which made him a security risk. Secretary Dulles called me to his office, where the security office file and the FBI reports on Ambassador Bohlen were assembled on his conference table. I was instructed to bring a tape recorder.

As I entered Secretary Dulles’s office, I was introduced to Senators Taft and Sparkman. The secretary, with a flourish, instructed me to review with the senators the files on Mr. Bohlen. The secretary noted, however, that allowing the senators to see these files was “without prejudice to the concept of executive privilege.”

Neither senator found anything incriminating in the files, and then we proceeded with the tape recording. Unfortunately, the extension cord for the recorder was too short, the quality of the tape was poor, and the volume potential of the recorder was low. This meant that Senators Taft and Sparkman and I had to lie down on the floor of Secretary Dulles’s office in front of his desk and listen to the recording. I certified in a document that it was not Ambassador Bohlen’s voice. That was also evident to all present. Shortly thereafter Ambassador Bohlen was cleared and took off for his new assignment.

Nerves were constantly on edge in the department. This led to over-reaction whenever relatively minor incidents occurred. …

There was a general sentiment and belief in the department during the McCarthy years that there was telephone and mail censorship. …

The promotion list was held up for many months under new requirements while the loyalty of long-time officers of the domestic and Foreign Service was subjected to so-called full-field investigations. Key officials of the office of security were interrogated at length, accused of removing files or covering up. As a consequence, they were either transferred or left voluntarily.

I had opposed Senator McCarthy in his efforts to obtain the “raw” files of officials of the Department of State for use by his committee. C. P. Trussed in a special edition of the New York Times recorded my bitter exchange with Senator McCarthy and the senator’s frustrated response of “I give up,” in an article of February 21, 1953. I had removed from access to security files an office of security agent who took notes and references from those files to McCarthy. Roy Cohn of the McCarthy Committee threatened me with contempt of Congress for intervening with a congressional witness.

It was in July 1953 that I received a beautifully worded memorandum from the bureau of security and consular affairs giving me unsolicited “sick leave.” …

The McCarthy era was an unforgettable experience. But one conclusion I came to … was that not one single case of disloyalty to the United States surfaced during my period. Cases involving the temptations and social weaknesses to which all persons are subject, yes. But the dominant characteristics shown in the thousands of files I had an opportunity to review then were loyalty, devotion, and intelligence on the part of our Department of State people, both domestic and Foreign Service.

In going over these recollections of those unfortunate days of the McCarthy era, it behooves us to recall that somehow it all began because of foreign policy reverses, concerning which only history could make an assessment. To try to preempt history may perpetuate the kind of bitter quarrels of the McCarthy years that a few of us can still remember vividly even after a quarter of a century has passed. As Winston Churchill said before the House of Commons in June 1940, during the Battle of Britain: “If we open a quarrel between the past and present, we shall find that we have lost the future.”