Going to the Hadhramaut

The Foreign Service Journal > July/August 2021 > Going to the Hadhramaut 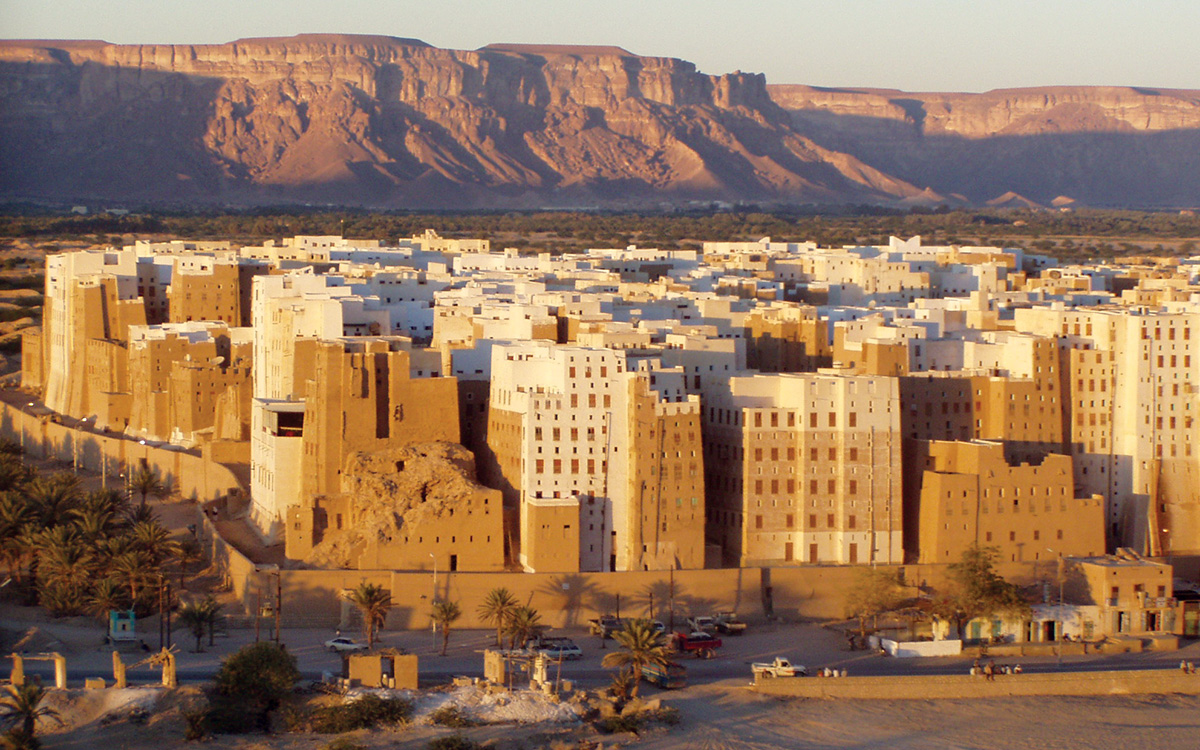 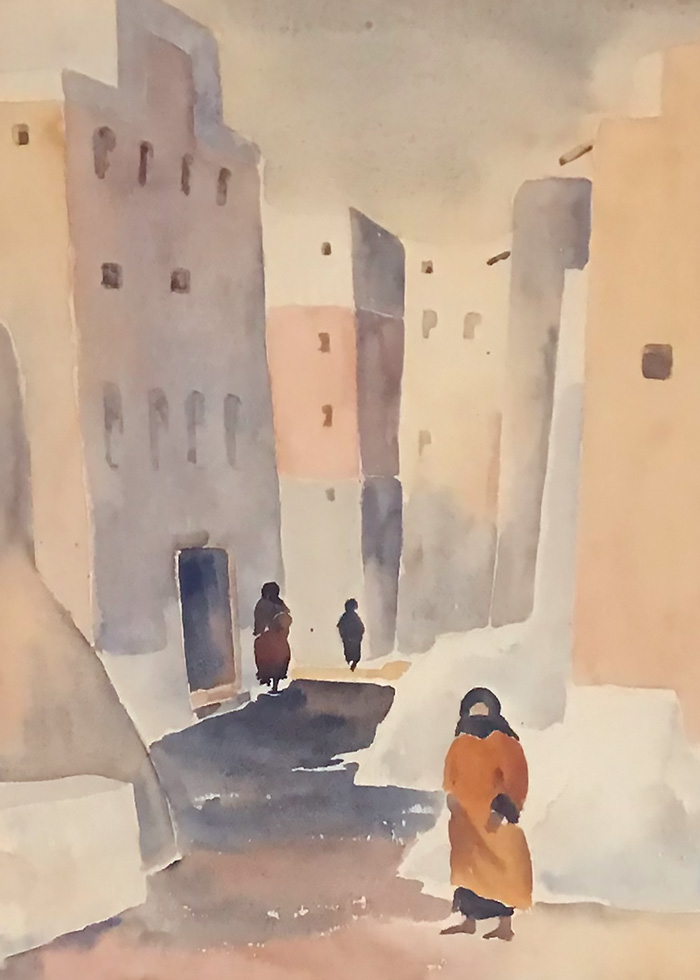 A watercolor painting of Seiyun, where the author and her FSO husband went for meetings while assigned to Aden, then a British colony.
Courtesy of Kate Carr

The Hadhramaut in southern Arabia has a long history. My husband, Dave, and I visited this fabled desert area, then administered by Britain, in October 1966. Dave, who was assigned to Aden, was going to meet businessmen in the ancient cities of the valley.

From antiquity, the Hadhramaut was famous for its spices. Frankincense and myrrh, used in large quantities in pre-Christian religions, grew in South Arabia. However, many of the spices carried along the caravan routes came from the Far East. In Europe, South Arabia was referred to as the Spice Islands because it was thought that all the spices grew there.

Actually, the Hadhramis sailed across the Indian Ocean in small sailboats pushed by the winds that blew east half of the year and west the other half. It was centuries before the European nations learned the secret of this navigation.

Many of the Hadhrami businessmen spent their whole working lives in Indonesia and the Netherlands East Indies. The greatest wish of those that lived abroad was to retire to their beloved homeland, build mansions and be buried in the cemeteries. The dead in these huge cemeteries still outnumber the people living in the cities.

We flew in on a DC-3, one of the small airplanes of Aden Airways. Since we were going over mountains, the propeller plane was tossed all about. We shook our way down to the sandy airfield from which hot air blasts rose.

That first night, we stayed at the guesthouse in Tarim. It was a beautiful old house in a date palm garden. There were lovely flowers and a swimming pool with one tree shading it. We slept in a cupola at the top of the house to catch whatever breeze might blow. The next morning, Dave and I were driven to Seiyun, where he met the Sultan of Kathiri. Kathiri is one of the two major states that make up the Hadhramaut.

Dave spoke to him and other sultans in classical Arabic because they were well educated, and well-educated people conferred formally in that language. Fortunately, he had been trained in Arabic in Beirut.

The high point of the trip was a drive to see Shibam, a city of high brown-and-white skyscrapers that rise before you in the desert. I learned these mud houses reach six to 11 stories, with some as high as 98 feet. The vertical houses have to be constantly maintained by applying new layers of mud.

Built in the 1530s, Shibam is called the oldest skyscraper city in the world, even dubbed “the Manhattan of the Desert” in the 1930s by the noted British explorer Freya Stark. With 500 houses crowded together, more than 7,000 people currently live there.

Here, Dave visited businessmen who lived in the upper stories of their office buildings. I was invited to visit their wives in the harems located on even higher floors. Sitting on cushions, I spoke in colloquial Arabic with women who were fascinated by my Western clothes.

These women all wore beautifully embroidered dresses and had their hair elaborately braided. Low coffee tables and painted cupboards to hold their many dresses were the only furniture. I answered as many questions as I could about the world outside.

In one harem, the women were engaged in staining the hands of a young bride-to-be with henna. I watched in fascination as they cut the thin strips of tape to form the pattern on her hands. They then painted all the uncovered parts with red dye. 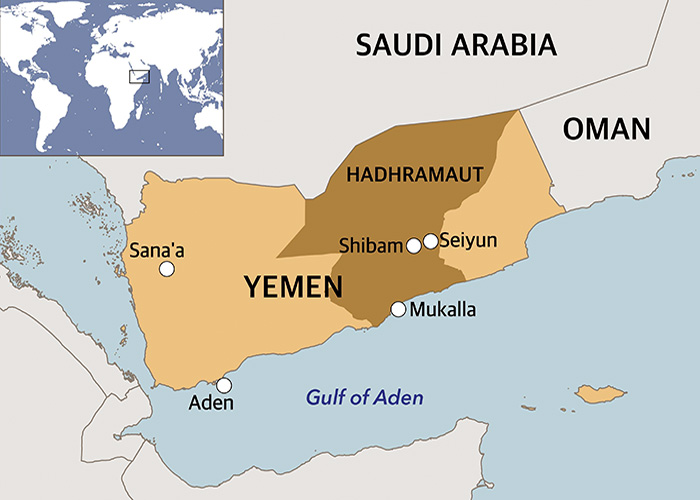 Things are not always peaceful in the Hadhramaut. Eighty years ago, the people were starving because constant warfare between the tribes made it impossible to farm. To combat this, a British official brokered Ingrams’ Peace. Between 1934 and 1937, Harold Ingrams, with his wife, Doreen, traveled throughout the Hadhramaut.

He was sent as an adviser to arrange treaties between the many small tribes. He obtained 1,400 signatures to a three-year truce, which was later extended. The peace was wildly popular as conditions had been so grim due to the fighting.

Later, I found out that even in 1966, getting to the Hadhramaut was perilous. While my husband was driven on the frequently mined road to Mukalla to meet the man who had just become Sultan of Qu’aiti, I flew home to Aden.

A month later, on Nov. 22, the son of Amir Mohammed bin Said planted a bomb that blew up the Aden Airways plane on which his father was traveling. The prime minister and the 29 other people aboard were killed.

Many changes have occurred in the Hadhramaut since 1966 when Dave and I were in the Aden protectorate. The British left in late 1967, and the independent protectorates became part of Yemen. (For the most part, Hadhramis consider themselves Hadhramis and not Yemenis, and often do not have Yemeni passports.)

In 2014, civil war began in Yemen. Shiites captured Sana’a, Yemen’s capital, from the Sunni government. One hundred thousand people have been killed in Yemen by Saudi bombing, and 85,000 have died in the famine. Although the Hadhramaut has not been bombed, its people have suffered financially.

A major problem for the Hadhramaut is also the maintenance of mud buildings. A tropical cyclone flooded the area in 2008. Four towers were destroyed, and 15 others damaged, in Shibam. Appeals for financial aid have been made to UNESCO, which pledged $194,000 to help with restoration of the heritage site. The European Union has also been asked for funds.

Despite these and other dangers and depredations, the mud skyscrapers still stand, representing the all-enduring Hadhrami culture. 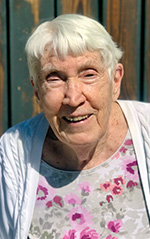 Kate Carr and her FSO husband, David, were posted for 18 years in the Middle East. During those years, they explored the countries that are presently in the news. Kate Carr’s earlier FSJ articles were “Into the Desert” (about Syria, April 2016) and “The End of the British Empire in Aden” (July/August 2015). David Carr retired from the Foreign Service in 1993, and the couple lives in Centennial, Colorado, near their daughter.