The July/August issue focuses on perspectives on diversity and inclusion. 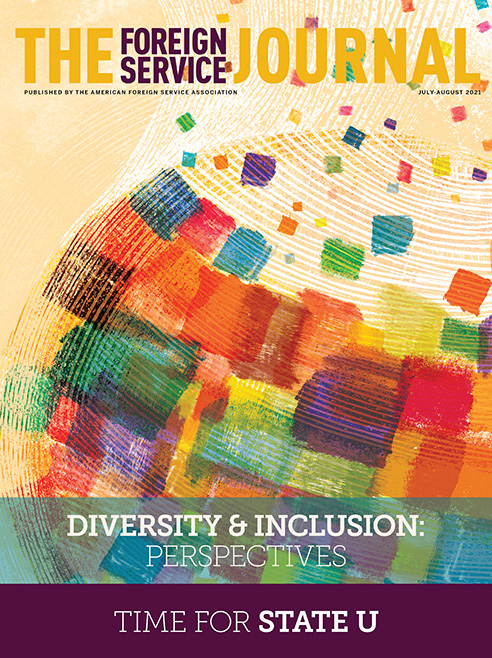 Diversity and Inclusion in the U.S. Foreign Service: A Primer

Here is a historical look at gender, ethnic and racial diversity in the Foreign Service and the long and uneven battle for progress.

Achieving Parity for Women in the Foreign Service

A better understanding of the barriers to women’s advancement—and good data—is needed to continue moving forward.

Asian Americans Can No Longer Be Silent, and Neither Should You

Generations of citizenship and sacrifices for and contributions to America notwithstanding, Asian Americans face the need to prove their loyalty over and over.

The Power of Vulnerability

A Black former consular fellow, whose report of her ordeal at the hands of U.S. officials at the border with Mexico shook up the State Department, shares her thoughts today.

Countering bias and recognizing overt racism are important, but it’s time to go beyond this work and take a hard look at institutional racism in the department.

What does exclusion look like? An FSO explores the concept of microaggressions—and suggests how shining a light on them can help foster a culture of inclusion.

How the Transition Center Expands Inclusion

Described as a “hidden gem” by this FSO, FSI’s Transition Center has a range of tools and services that are vital in helping build a more agile, inclusive Department of State.

A Governing Board Term Unlike Any Other

A U.S.-German Look at the Essentials for Modern Diplomacy

BY MIRKO KRUPPA AND KENNETH KERO-MENTZ

Going to the Hadhramaut

Should the Foreign Service Act of 1980 Be Overhauled?

USAID and Diversity, Equity and Inclusion