The Power of Vulnerability

The Foreign Service Journal > July/August 2021 > The Power of Vulnerability

A Black former consular fellow, whose report of her ordeal at the hands of U.S. officials at the border with Mexico shook up the State Department, shares her thoughts today.

It’s been more than a year since I came forward with my story of what happened to me while serving as a first-tour State Department consular fellow in Juarez in 2018 and 2019. I experienced repeated harassment and racial profiling by U.S. Customs and Border Protection officials when crossing the U.S.-Mexico border. As horrific as the harassment was, the utter lack of support from the State Department proved just as damaging. It took me time to realize that my experience was not only abnormal, but traumatic.

There is power in calling something by its name.

On my last day as a consular officer, I had a going-away lunch with a few colleagues. Then I cleared my desk and went home to my apartment. It felt like a failure that the dream that I’d worked so hard for was over. On my flight back home to North Carolina, I was pulled into a back room by U.S. Customs and Border Protection, and all my belongings were searched. Afterward, I sat in a bathroom stall at the Houston airport and wept.

The thing about trauma is that often, we carry it alone. We do not know whom to trust. I found myself in an environment that was downright unsupportive. Who feels safe to speak up when it is clear that advocating for yourself is grounds for retaliation and loss of a career? For most, losing their job and primary source of income is not an option; but I learned that you have to choose yourself, time and time again.

The Importance of Resilience

In preparation for my first assignment with the State Department, to Ciudad Juarez, I was lectured on the importance of resilience. One trainer, Beth Payne, discussed her most challenging experiences and the tools she used to overcome them. Beth spoke from the heart, giving our class a worksheet while telling her story, a speech intertwined with parenting, trauma, grief and death. Something told me to hold on to that worksheet. Little did I know that I would need it less than three weeks later when I arrived in Mexico in October 2018.

For the next six months, I was repeatedly harassed by CBP officials at the border and flagged into secondary inspection for what I estimate to be 25 times. On two occasions, U.S. Customs and Border Protection officials placed their hand on their gun. It took me a long time to realize that the officials could have killed me and gotten away with it.

The ongoing harassment from CBP and lack of any institutional support from State had a devastating impact on my health and my career. Quite frankly, I am not the same person any longer.

A year later, I am beginning to find the courage to accept that I am on a new journey. This new path is not remotely close to what I planned for my life—which is disappointing and has taken some time for me to begin to accept. But it is also freeing. Disappointing, because I worked hard to get where I was, but freeing because I can now give myself grace to find the resources and community I need.

Imagine how different things could have been if, when I told the Juarez regional and assistant security officers that I was being harassed by CBP officials, they had just said: “We believe you.” I wouldn’t be dealing with post-traumatic stress disorder, depression and anxiety at the age of 28. Instead, I would be on my second tour, just like the rest of my class.

Instead, I was repeatedly placed in situations where I was left to explain the harassment I continued to experience, begging people in power to listen to me and act accordingly. I was handed white fragility served with a side of tears, of people in power scared to just do the right thing. I was silenced. After being transferred to Mexico City, I emailed Juarez management, and no one responded.

Imagine if the people in power actually cared about the people they managed.

How many of us have lost dreams or had dreams deferred?

The ongoing harassment from CBP and lack of any institutional support from State had a devastating impact on my health and my career.

The State Department consistently educates and promotes the idea of resilience, but continues to erect barriers and create circumstances that require resilience. Life is hard enough in the Foreign Service, but how many of you could have careers that you dreamed of if it was just a little bit easier?

During the period since my May 2020 blog post went viral, I have used my new platform to raise more than $33,000 for local organizations and nonprofits in Durham, N.C., my community. I made new friends, met an incredible woman who I am honored to call my mentor, and received more than a thousand emails of support. I’m extremely grateful for every single person who reached out with words of encouragement. As I’ve been on this journey, I am continuously reminded that we are absolutely nothing without our community.

What surprised me most was how many people told me they were shocked that I came forward with my story. Far too many people suffer alone and in silence. To my dismay, I received numerous emails detailing a long history of abuse by CBP. As far as CBP goes, the agency has not been held accountable in my case or others. How does one seek justice when the perpetrator is the one investigating the crime?

While my story is traumatic, it’s not the first at State, which is full of managers who contribute to a culture of “pale, male and Yale.” I’ve discovered that my experience resonated with many people of color who work for the department because they, too, have been harassed while crossing the U.S. border—and not just five, 10, 20, 30 years ago, but recently. They also have experienced blatant racism and discrimination, only to be dismissed, ignored and eventually have the experience repeated.

If State has this kind of leadership, we should find other role models.

After my blog post went viral, the State Department scrambled for answers. On Sept. 22, 2020, when Representative Joaquin Castro (D-Texas) asked then–Director General Carol Perez about my case directly in a House Committee on Foreign Affairs hearing on diversity at the State Department, she acknowledged the obvious: “The experiences of Tianna Spears were horrific.”

Then she added: “This is our call to action: When something is happening, please encourage the person to speak up, to come to us. Sometimes we don’t know and that is one of the issues we’re going to have to tackle, which is how to have honest conversations that do not have a negative reverberation. Because if you don’t tell us, I’m sorry, but I have 75,000 people, it’s hard to know an individual is facing this kind of horrific treatment …”

But I did speak up! I repeatedly emailed and met with upper management. I explained myself over and over. My hair fell out in my sink from the harassment and stress, as State Department officials told me: “Don’t cross the border.”

Enough. Why waste precious breath attempting to convince those committed to misunderstanding? Why hold your breath waiting for your oppressor to validate your experience? An individual can create more change and progress by holding strong to their values. Rather than having the life beaten out of you, it’s best to put your hands up; and as I’ve learned, there is power in vulnerability and telling your truth.

I do not believe in organizations that preclude people who look like me from having a seat at the table. Nor do I believe in organizations that gaslight former and current employees. There is nothing—no justice, apology or action—that Customs and Border Protection, Carol Perez and the State Department can give me to change the outcome of my experience.

And that is where my healing begins.

If it takes a blog post from me, a 28-year-old former consular officer, to spur State into action, so be it.

Conversation is accountability. If you need to control the outcome of a conversation, that is not a safe space to voice concerns; it is a public affairs strategy. If your organization cannot participate in conversations without fear of expected and well-deserved “negative reverberation,” it’s time for new leadership. Throwing additional people of color into a burning building only increases the fatality rate, and the onus should not be on people of color to suffer in the name of diversity and inclusion.

How can the United States shape foreign policy if our foundation at home is shattered? How many more calls to action are needed?

If the State Department truly placed importance on diversity and inclusion, the organization would not continuously produce years of such dismal results on diversity and inclusion. Years of lip service. There have been op-eds, decades of inaction and performative actions, essays, legislation, the recent Truman Center report, task forces and congressional hearings on reforming the State Department. And each issue of The Foreign Service Journal offers solutions and fresh perspectives on ways to improve the State Department. But what will it take and how much longer for a much-needed reform?

The State Department knows exactly why people of color quit its ranks in such large numbers early in their careers. How many more studies are needed?

The culture of the State Department is flawed in fixable ways. How many employees know the names of their colleagues, treat visa applicants like human beings, do the right thing, and operate with empathy? Unfortunately, the organization is also flawed in institutional and systemic ways.

Managers who mistreat, harass and terrorize staff must be held accountable. Most know the common perception of the EEO process is that it is difficult to navigate and may invite future retaliation.

How many people have mental illness and health conditions from being thrown into hardship tours without any support? Or from being harassed by managers who are reassigned after repeated complaints, but seldom disciplined, and thus left to repeat previous egregious behavior?

If it takes a blog post from me, a 28-year-old former consular officer, to spur State into action, so be it. But this time, do me a favor and actually do something about these issues.

As Malcolm X said when asked in 1964 about progress on racial discrimination: “If you stick a knife in my back nine inches and pull it out six inches, there’s no progress. If you pull it all the way out, that’s not progress. Progress is healing the wound that the blow made. And they haven’t even pulled the knife out, much less heal the wound. They won’t even admit the knife is there.” 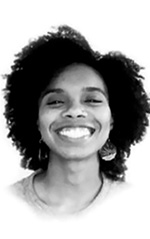 Tianna Spears, a Foreign Service consular fellow from 2018 to 2019, is the creator of the blog “What’s Up with Tianna” and founder of Tianna’s Creative, a storytelling collective. She writes about her experiences navigating the world and highlighting communities of color. She has written for American Diplomacy, Durham Magazine, the Los Angeles Times, the Matador Network and Politico, and was featured on ABC News, CNN and NPR and in Business Insider, CNN, INDY Week and The New York Times. 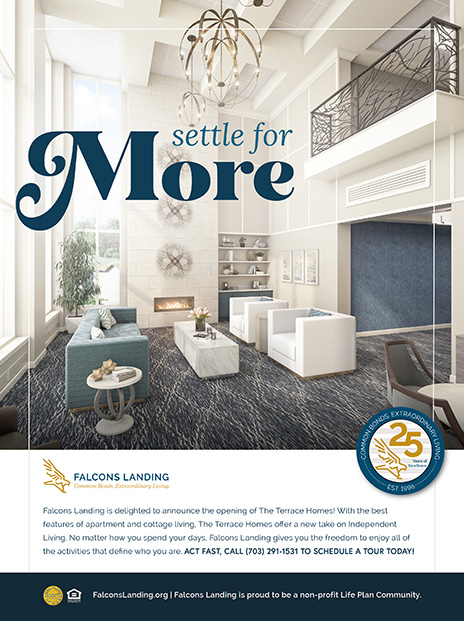 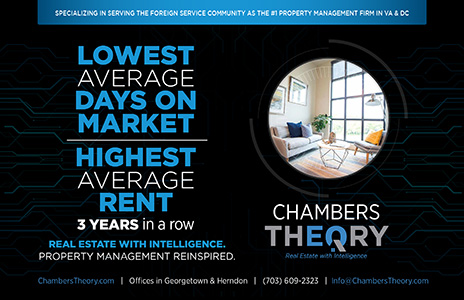 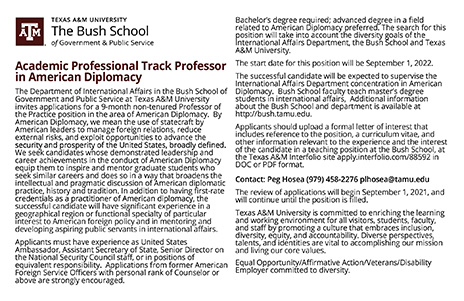