The May issue focuses on democracy. 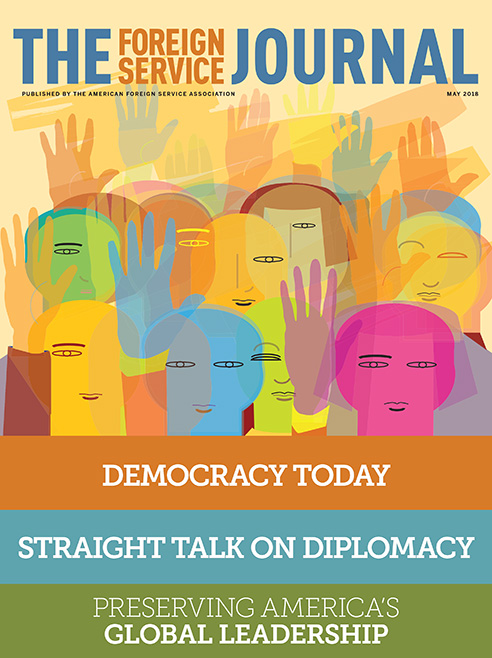 Lessons learned from the Tillerson tenure can help the new Secretary of State enhance the State Department’s core diplomatic and national security mission.

The State of Democracy in Europe and Eurasia: Four Challenges

In a decade of backsliding on democracy around the world, the countries of Europe and Eurasia feature prominently.

Widespread corruption, crime and a lack of security, education, employment and basic services are driving a loss of faith in democracy throughout the continent.

Since the 1990s electoral assistance has come into its own as a branch of foreign aid and as an academic discipline.

The plan for sweeping changes to meet economic and demographic challenges does not appear to include an opening-up of the political system.

Supporting Civil Society in the Face of Closing Space

Development professionals focus on the need to bolster and expand civil society’s “open space” in countries around the world.

BY MARIAM AFRASIABI AND MARDY SHUALY

A new breed of autocrat seems to be taking root in Southeast Asia today. Is the “domino theory” finally playing out?

Democracy in Indonesia: A Progress Report

On the 20th anniversary of its democratic experiment, Indonesia can cite significant gains. Growing challenges may threaten that progress.

The Card from Kabul

Response from MED: Our Commitment to Foreign Service Families

It Can’t Be Easy

EER Season: Thinking About the Precepts