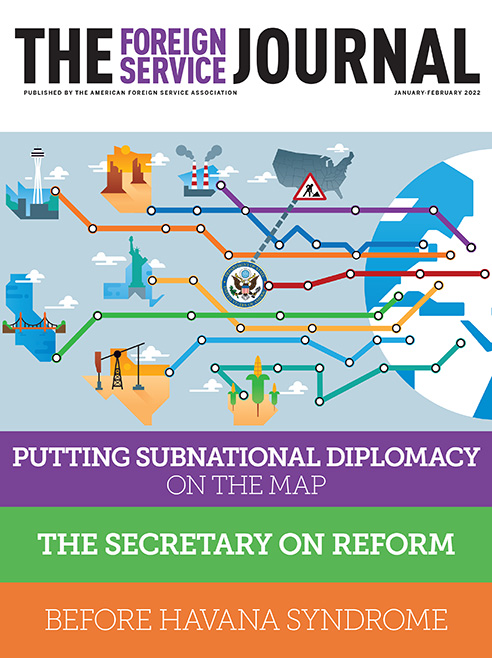 On Moves to Modernize: An Interview with Secretary of State Antony Blinken

On a New Approach to City and State Diplomacy

The FSJ Editorial Board offers thoughts to kick off an important policy discussion.

BY THE FSJ EDITORIAL BOARD

Engaging state and local actors in international diplomacy will help the State Department address the national security challenges of the 21st century.

The Benefits of International Partnerships

Pittsburgh’s former mayor describes the city’s transition from its heavy industrial past to a sustainable future.

Des Moines’ mayor connects the dots between work at the local level in America and effective global climate leadership.

The Future of Diplomacy Is Local

A former FSO, now a Democratic state committee member for the Bronx, explains how partnerships between local and federal government can help rebuild trust in U.S. foreign policy priorities.

The deputy mayor of Los Angeles argues that breaking down the silos between foreign and domestic policy will make international affairs more relevant for middle-class Americans.

Before Havana Syndrome, There Was Moscow Signal

Today’s Havana syndrome is “like déjà vu all over again,” as Yogi Berra might have put it.

A project to unearth the lives and legacies of the earliest diplomats is awakening a shared understanding of the U.S. Foreign Service and its history.

Reform for a New Year

Making the Case for Subnational Diplomacy

A Better Workplace Culture in 2022

High on Priorities, Short on Details