The March issue focuses on the Afghanistan evacuation. 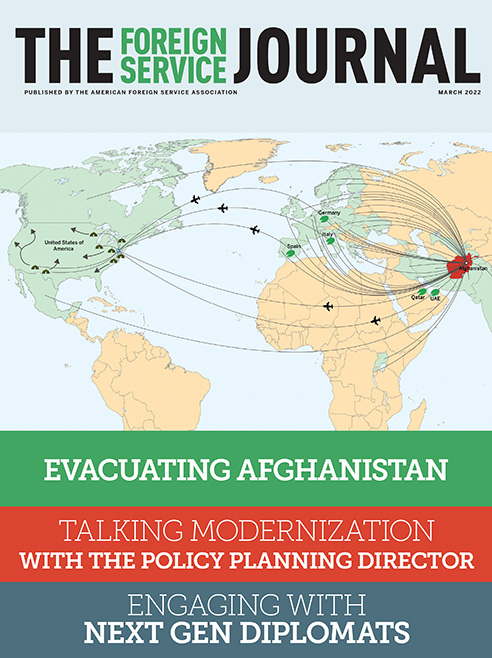 Operation Allies Refuge: The FS View from the Front Lines

FS members share their experiences working on various aspects of the Afghanistan evacuation and resettlement efforts, highlighting the successes as well as the adversity and tragedy.

An Afghan Interpreter’s Journey to the U.S.

Look inside the evacuation through the eyes of an Afghan ally who worked for the United States for more than a decade but still hasn't received his Special Immigrant Visa.

Consular Skills Put to Use in Rural America

Working remotely in the United States offers opportunities to help U.S. communities and raise public awareness about diplomacy and the Foreign Service.

Invest in the Next Generation: Ideas from the Entry-Level Group at Mission Pakistan

BY M.J. CRAWFORD AND KEOME ROWE

From Refugee to Camper to Diplomat: Why Summer Camp for FS Kids

Summer camp can offer a stable anchor in the FS child’s ever-changing world.

Those Who Forget History…

Time to Bring Back Legations Headed by Diplomatic Agents?

BY GERALD LOFTUS AND STUART DENYER