The May issue focuses on life after the Foreign Service. 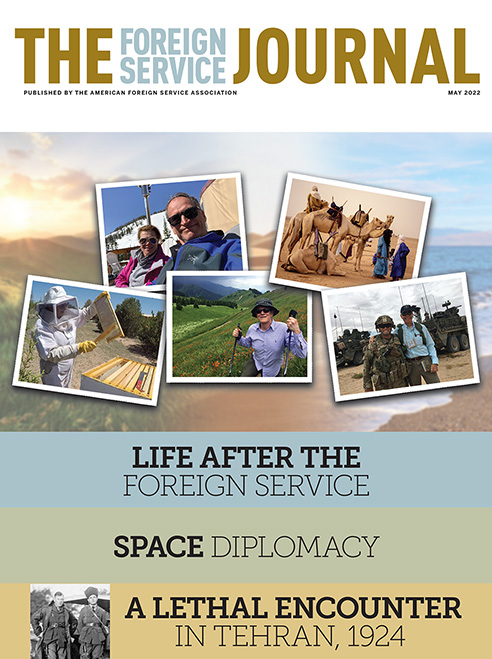 The Last Assignment: Moving into Retirement

Deciding where to settle in retirement, and making it happen, is not easy. Here are tips from some who have successfully navigated this process.

An Insider’s Guide to the Re-Employed Annuitant Program

Having second thoughts about leaving government service? Here’s a candid and authoritative look at returning to work for the government.

Working with the U.S. Military

A retired FSO ambassador offers insights and tips—the real deal—on working with the U.S. military after nearly a decade as a private contractor.

Global Photography: From Hobby to Career

For this FSO, commitment to a second career as a photographer was gradual.

Short-term consulting gigs with USAID made for a gratifying transition to full retirement for this FSO.

Though the Space Age is not new, space diplomacy remains an esoteric specialty at State. Here’s why it’s important to start changing this now.

BY DAVID A. EPSTEIN

Lethal Encounter in Tehran: The Attack on U.S. Vice Consul Robert W. Imbrie and Its Aftermath

Almost a century ago, an American diplomat died overseas at the hands of a mob. The implications of this tragic incident reached far beyond Iran’s capital city.

There Is Life After

On Our Own: Diplomats Deserve Equal Access to Reproductive Health Services

The Power of Our Example

Now Is the Time to Think about Retirement

Standing Behind Those Who Step Up