The December issue focuses on Russia and contains the FSJ's biannual Education Supplement. 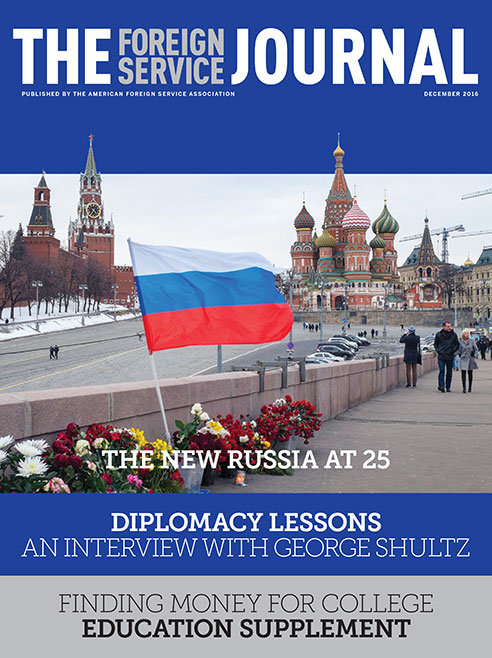 U.S.-Russia relations are in disarray, with talk of a new Cold War pervasive. Fortunately, framing the conflict in terms of national interests points to a way forward.

The Rise of the New Russia

This tour d’horizon from the fall of the Soviet Union to today—including hopes, disappointments and missed opportunities—puts U.S.-Russia relations into perspective.

Something Happened on the Way to the Market: The Economic State of the Former USSR

When it comes to the Soviet successor nations, economic and commercial diplomacy is a particularly important part of the U.S. foreign policy playbook.

Conversations in Moscow with Russians of different social strata paint a vivid picture of a country grappling with the meaning of the past quarter-century's upheavals.

Communications Behind the Iron Curtain

This firsthand account of a fire in the secure area of Embassy Moscow on March 28, 1991, conveys the importance and drama of Diplomatic Telecommunications Service work during the last days of the USSR.

George Shultz reflects on his tenure as Secretary of State in the Reagan administration and the process of making foreign policy and conducting diplomacy during the decade leading up to the fall of the Soviet Union.

Finding Money for College: A Guide to Scholarships

Scholarships can lighten the financial burden of a college education. Here are some tips on finding them.

Why USAID’s New Approach to Development Assistance Is Stalled

In Praise of the Ambassador’s Self-Help Fund

A Primer on Labor-Management Relations